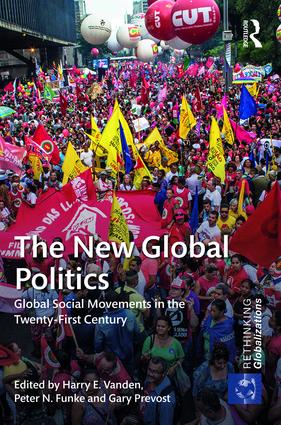 Over the past decade, there has been an unprecedented mobilization of street protests worldwide, from the demonstrations that helped bring progressive governments to power in Latin America, to the Arab Spring, to Occupy movements in the United States and Europe, to democracy protests in China. This edited volume investigates the current status, nature and dynamics of the new politics that characterizes social movements from around the world that are part of this revolutionary wave.

Spanning case studies from Latin America, North and South Africa, the Middle East, Asia, Europe, and North America, this volume examines the varied manifestations of the current cycle of protest, which emerged from the Global South and spread to the North and highlights their interconnections – the globalized nature of these social movements. Analytically converging around Sidney Tarrow’s emphasis on protest cycles, political opportunity structures and identity, the individual chapters investigate processes such as global framing, internationalization, diffusion, scale shifts, externalizations and transnational coalition building to provide an analytic cartography of the current state of social movements as they are simultaneously globalizing while still being embedded in their respective localities.

Looking at new ways of thinking and new forms of challenging power, this comprehensive volume will be of great interest to graduates and scholars in the fields of globalization, social movements and international politics.

3. Social Movement Governance in Bolivia: Contention in a multi-ethnic Democracy

4. Cycles of Protest and Social Movements in Brazil

6. Transition of Governance in Egypt in the Post Arab Spring

8. Iranian Women and Their Strategic Role during the Green Movement,

9. Sisterhood in the Age of Imperialism: Consequences of Transnational Activism for Women’s Movements in Post-colonial Muslim Societies

10. Revolution or Retaliation: Contested Meaning in the Syrian Uprising,

12. The Global Justice Movement and its Subterranean Afterlife in Europe: From the Zapatistas to Occupy and Austerity Protests

14. The Promise and Pitfalls of Horizontalism in the Occupy Movement

Harry E. Vanden is Professor of Political Science and Latin American Studies at the University of South Florida, USA.

Peter N. Funke is Associate Professor of Political Science at the University of South Florida, USA.

Gary Prevost is Professor of Political Science at St. John’s University and the College of Saint Benedict, Minnesota, USA.