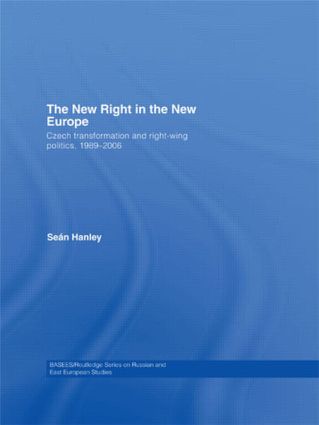 The New Right in the New Europe

This book considers the emergence of centre right parties in Eastern Europe following the fall of communism, focusing primarily on the case of the Czech Republic.

Although the country with the strongest social democratic traditions in Eastern Europe, the Czech Republic also produced the region’s strongest and most durable party of the free market right in Václav Klaus’ Civic Democratic Party (ODS). Seán Hanley considers the different varieties of right-wing politics that emerged in post-communist Europe, exploring in particular detail the origins of the Czech neo-liberal right, tracing its genesis to the reactions of dissidents and technocrats to the collapse of 1960s reform communism. He argues that, rather than being shaped by distant historical legacies, the emergence of centre-right parties can best be understood by examining the responses of counter-elites, outside or marginal to the former communist party-state establishment, to the collapse of communism and the imperatives of market reform and decommunization. This volume goes on to consider the emergence of right-wing forces in the disintegrating Civic Forum movement in 1990, the foundation of the ODS, the right’s period in office under Klaus in 1992-97, and its subsequent divisions and decline. It concludes by analyzing the ideology of the Czech Right, and its growing euroscepticism.

"Seán Hanley’s book deals with the fortunes and travails of this creed put into political practice, enlightening the reader on the concrete ways of tacit assumptions being politically voiced or, after all, ‘materialised’. But this monograph goes beyond that and can be considered a major contribution to the study of Czech and postcommunist party politics. In spite of being relatively short, the book gives the kind of impression usually produced by ‘definitive accounts’, but it leaves enough room for additional thoughts and offers inspiration for further research. Hanley’s book is strong in many respects: it is a nice example of the path-dependency approach and frequently it challenges (sometimes demolishes) the many conventional assumptions and clichés used to explain the development of post-communist party politics. Hanley’s intelligent work on the Czech case has methodological implications for the entire field of study." - Peter Ucen, Comenius University, Bratislava

'This monograph is essential reading for postgraduates and academics working in cognate fields' - Andrew Cook, University of Newcastle

1. Getting the Right Right in Post-Communist Europe 2. Historical Legacies and the Czech Right 3. 'Normalization' and the Élite Origins of the Czech Right 4. From Civic Movement to Right-Wing Party: The Emergence of the Civic Democratic Party 1990–1 5. 'An Unrepeatable Chance': The Dominance of the New Czech Right 1992–6 6. Beyond the Politics of Transformation: Declining and Realigning 1996–2006 7. Conservatism, Nation and Transformation: Building a New Ideology of the Right 8. From Neo-Liberalism to National Interests: Europe and the New Czech Right

Seán Hanley is Lecturer in East European Politics at the School of Slavonic and East European Studies, UCL, UK. His research interests include Czech politics, the Czech Republic, the formation and organization of political parties, the comparative politics of the European centre-right, comparative democratization and the demographic politics of Eastern Europe.