The Official History of Britain and the European Community, Vol. II
From Rejection to Referendum, 1963-1975 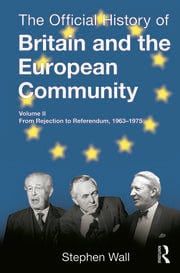 The Official History of Britain and the European Community, Vol. II: From Rejection to Referendum, 1963-1975

This is the second volume in The Official History of Britain and the European Community, and describes the events from 1963 up until the British referendum on the Common Market in 1975.

In 1963, General de Gaulle dashed Prime Minister Macmillan’s hopes of taking Britain into the European Community (the Common Market). When Labour Prime Minister Harold Wilson tried again, de Gaulle again said ‘no’. Six years later, Prime Minister Edward Heath took Britain into the EEC. But by then the country was split and Harold Wilson, to keep the Labour Party from voting to leave, undertook to renegotiate Britain’s membership. When Labour won the 1974 election that renegotiation culminated in the first nationwide referendum ever held in the United Kingdom.

The British people voted by two to one to stay in the European Community, but British membership has been controversial ever since. This is the story of why three very different Prime Ministers all concluded that, in the British national interest, there was no viable alternative to joining the Common Market. In the words and documents of the time (those of politicians, diplomats and journalists from Britain, France and Germany) it relives the frustrations, successes and humiliations of British politicians as they wrestled with the most important issue of their generation. It shows, with the authority of the Government papers of the day, where and why today’s European controversy started and why yesterday’s challenges, and the way they were confronted, hold valid lessons for our time.

This book will be of much interest to students of British political history, European Union politics, Diplomatic History and International Relations in general.

Stephen Wall worked in the British Diplomatic Service. He was Private Secretary to five Foreign Secretaries and to Prime Minister John Major, Britain’s Ambassador to the European Union and Tony Blair’s adviser on European issues. His book A Stranger in Europe was published in 2008.

"This is a useful addition to the existing literature on Britain and Europe. Such is the richness of the material, and the thoroughness of Wall’s account, that this is a book that will prove essential reading for anyone working on the troubled history of Britain’s attitude towards Europe. There is also plenty here for those more interested in the present and the future, but still sensitive to the importance and relevance of contemporary history." - N. Piers Ludlow, International Affairs, Vol. 88, 6, November 2012