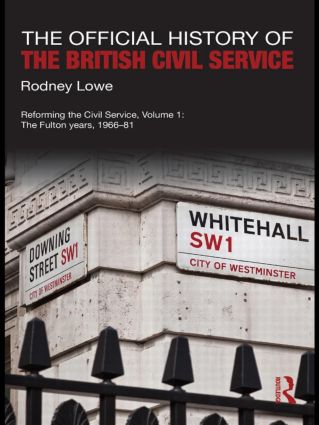 The Official History of the British Civil Service

This first volume of the Official History of the UK Civil Service covers its evolution from the Northcote-Trevelyan Report of 1854 to the first years of Mrs Thatcher’s government in 1981.

Despite current concerns with good governance and policy delivery, little serious attention has been paid to the institution vital to both: the Civil Service. This Official History is designed to remedy this by placing present problems in historical context and by providing a helpful structure in which others, and particularly former officials, may contribute to the debate. Starting with the seminal 1854 Northcote-Trevelyan Report, it covers the ‘lost opportunity’ of the 1940s when the Service failed to adapt the needs of ‘big government’ as advocated by Beveridge and Keynes. It then examines, in greater detail, the belated attempts at modernisation in the 1960s, the Service’s vilification in the 1970s and the final destruction of the ‘old order’ during the first years of Mrs Thatcher’s government.

This Official History is based on extensive research into both recently released and unreleased papers as well as interviews with leading participants. It has important lessons to offer all those, both inside and outside the UK, seeking to improve the quality of democratic government.

This book will be of great interest to all students of British history, British government and politics, and of public administration in general.

Rodney Lowe is Emeritus Professor of Contemporary History at the University of Bristol. He has published widely on comparative history, and especially on UK government and welfare policy.