The Official History of the UK Strategic Nuclear Deterrent
Volume I: From the V-Bomber Era to the Arrival of Polaris, 1945-1964 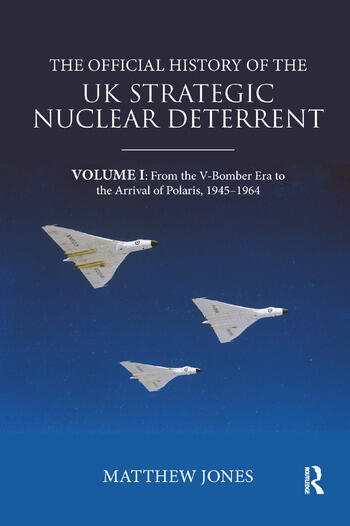 The Official History of the UK Strategic Nuclear Deterrent: Volume I: From the V-Bomber Era to the Arrival of Polaris, 1945-1964

Volume I of The Official History of the UK Strategic Nuclear Deterrent provides an authoritative and in-depth examination of the British government’s strategic nuclear policy from 1945 to 1964.

Written with full access to the UK documentary record, this volume examines how British governments after 1945 tried to build and then maintain an independent, nationally controlled strategic nuclear capability, and the debates this provoked in official circles. Against a background of evolving British ideas about deterrence during the Cold War, it focuses on the strategic, political and diplomatic considerations that compelled governments, in the face of ever-increasing pressures on the defence budget, to persist in their efforts to develop nuclear weapons and to deploy a credible nuclear force, as the age of the manned bomber gave way to the ballistic missile. Particular attention is given to controversies over the portion of the defence budget devoted to the deterrent programme, the effects of the restoration of Anglo-American nuclear collaboration after 1958, increasing reliance on the United States for nuclear delivery systems, the negotiations that led to the Nassau Agreement of 1962 and the supply of Polaris, and discussions within the Western Alliance over the control of nuclear forces. By the time of the October 1964 election, when this volume concludes, previous dismissal of the prospects for successful ballistic missile defence were giving way to growing doubts over the long-term effectiveness of the Polaris system in its role as an independent deterrent, several years before it was due to enter service with the Royal Navy.

This book will be of much interest to students of British politics, Cold War history, nuclear proliferation and international relations.

2. The rise of ballistic missile defence

3. In the shadow of Sputnik: The nuclear sufficiency debate and the restoration of Anglo-American nuclear collaboration, March 1957-February 1959

5. The future nuclear programme and the cancellation of Blue Streak, December 1959-April 1960

12. The origins of a Polaris improvement programme: HR 169 and the emergence of the Moscow ABM system

Matthew Jones is Professor of International History at the London School of Economics and Political Science, UK, and author of, amongst other books, After Hiroshima: The United States, Race, and Nuclear Weapons in Asia, 1945–1965 (2010).

'The author had access to Government records and was able to interview some of the participants to cover the high-level politics. I was surprised to find it difficult to break off reading because it was compiled from extracts from files, letters and reports of meetings. Professor Jones has done a splendid job putting it all together as a readable story.'--Reg Milne, Afterburner