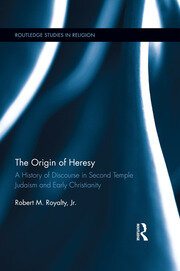 The Origin of Heresy: A History of Discourse in Second Temple Judaism and Early Christianity

Heresy is a central concept in the formation of Orthodox Christianity. Where does this notion come from? This book traces the construction of the idea of ‘heresy’ in the rhetoric of ideological disagreements in Second Temple Jewish and early Christian texts and in the development of the polemical rhetoric against ‘heretics,’ called heresiology. Here, author Robert Royalty argues, one finds the origin of what comes to be labelled ‘heresy’ in the second century. In other words, there was such as thing as ‘heresy’ in ancient Jewish and Christian discourse before it was called ‘heresy.’ And by the end of the first century, the notion of heresy was integral to the political positioning of the early orthodox Christian party within the Roman Empire and the range of other Christian communities.

This book is an original contribution to the field of Early Christian studies. Recent treatments of the origins of heresy and Christian identity have focused on the second century rather than on the earlier texts including the New Testament. The book further makes a methodological contribution by blurring the line between New Testament Studies and Early Christian studies, employing ideological and post-colonial critical methods.

Robert Royalty is Associate Professor of Religion at Wabash College (Indiana, USA). He is the author of The Streets of Heaven: The Ideology of Wealth in the Apocalypse of John and scholarly articles on the New Testament and early Christianity.

"Royalty persuasively makes his case and invites further work in the archaeological site he has begun to dig in this study. Any further discussion of the origins of heresy in early Christian discourse, especially amongst those who continue to champion Justin Martyr as its originator, will need to take into consideration these important arguments." – Harry O. Maier, Church History

"Royalty has produced a closely argued and clearly articulated book. He utilizes Foucauldian discourse analysis to present a persuasive reconstruction of the genealogy of the concept of heresy and the genre of Christian heresiography. That he has done so without the obfuscation one sometimes encounters in works that employ such analysis is refreshing, and a tribute to his scholarship. The book is a worthy contribution to the study of early Christianity and the history of ideas." – Jonathan Kearney, Journal for the Study of the New Testament

"In summary, this book is a learned, wide-ranging, and sophisticated contribution to the study of early Christianity. The emphasis upon politics and rejection complements that upon doctrine. Even where one questions Royalty’s thesis, the questions are important and enriching. As the pendulum
continues to swing, these ideas will have to be considered." – Joseph Azize, University of Notre Dame, Society of Biblical Literature

"This exciting and original book makes a significant contribution to our understanding of the formation of Christian communities in the first two centuries. Royalty’s work demonstrates that heresiology, the rhetoric of demonized difference, shaped Christian identities from the start, even before we have thought Christians invented ‘heresy.’ Anyone interested in the origins of ‘orthodoxy’ and ‘heresy’ should read this book." – David Brakke, Indiana University, USA

"An important new book by Robert M. Royalty Jr. points out that Christian heresy did not emerge when some misguided Christians deviated from a 'pure' and 'original' orthodoxy. 'Orthodoxy' did not precede 'heresy.' Instead, diversity marks Christianity as far back as we can see. Those who claimed an orthodox identity invented heresy by labeling others as deviant. Some Christians began identifying other Christians as 'false teachers' or 'heretics' in the attempt to privilege their own way as 'orthodox.' ...This book performs the valuable function of reminding us that heresy is not a matter of doctrinal error so much as a political and rhetorical invention on the part of those who insist their way is the one 'true' way." – Greg Carey, Lancaster Theological Seminary, USA in Huffington Post Religion