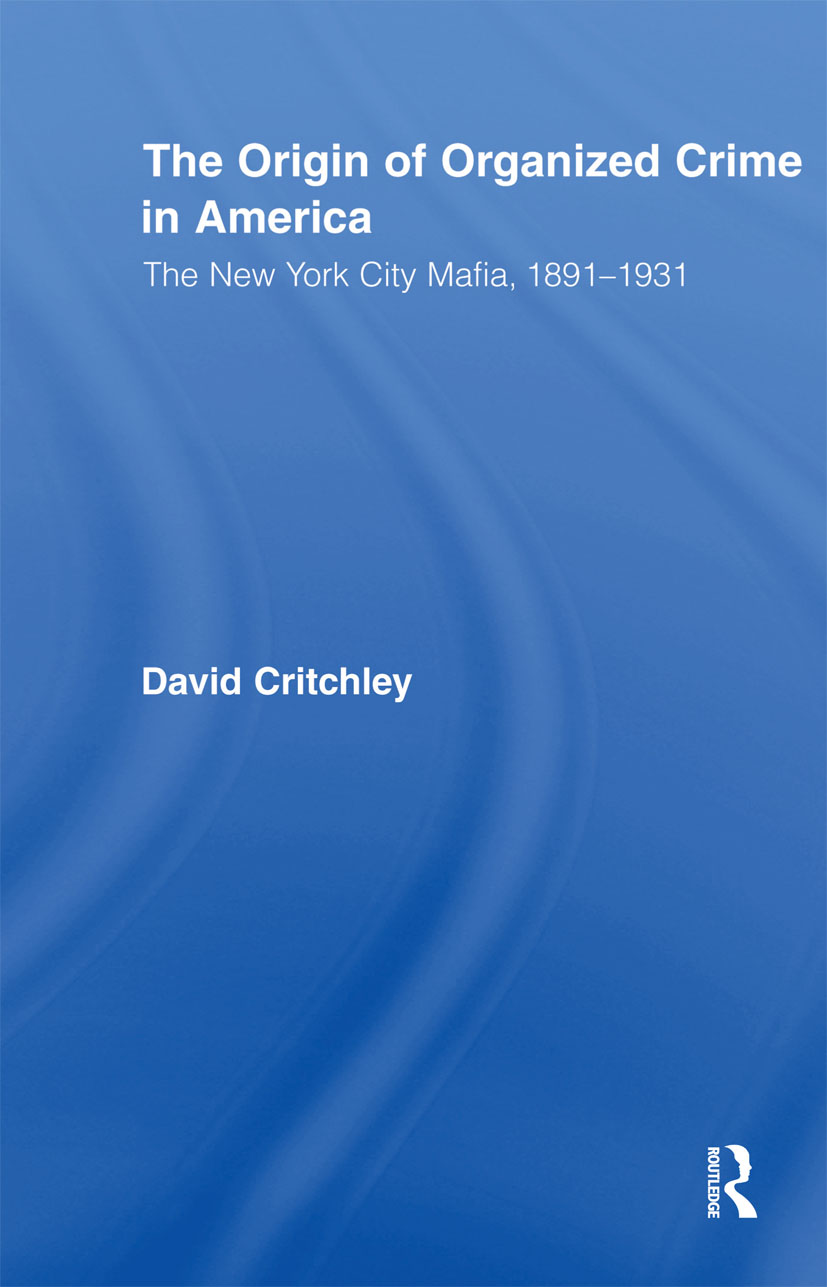 The Origin of Organized Crime in America

While the later history of the New York Mafia has received extensive attention, what has been conspicuously absent until now is an accurate and conversant review of the formative years of Mafia organizational growth. David Critchley examines the Mafia recruitment process, relations with Mafias in Sicily, the role of non-Sicilians in New York’s organized crime Families, kinship connections, the Black Hand, the impact of Prohibition, and allegations that a "new" Mafia was created in 1931. This book will interest historians, criminologists, and anyone fascinated by the American Mafia.

"This work adds significant value to the small collection of competently crafted histories of organized crime. Historians and other interested scholars will appreciate the richness of Critchley's extensive endnotes and selected bibliography. … All readers will acknowledge the author's research diligence. He has produced a volume that will be cited frequently. This book should be added to library collections at all campuses where departments of history and criminology share space but where they may rarely exchange ideas about how organized crime history can be improved."

"This is one of the most comprehensive studies of the New York Mafia… Essential." - W.M. Fontane, McNeese State University, Choice

"In an ideal world every writer, whether academic, professional or popular, should consult David Critchley’s book before repeating assertions about the history of organized crime in New York in particular and the United States as a whole. … Above all the depth of research in The Origin of Organized Crime in America captures the diversity and modesty of scale and outcomes that characterized New York City’s Mafia in its formative years." - Michael Woodiwiss, University of the West of England, Bristol

"…[W]e genuinely enjoyed reading The Origin of Organized Crime in America. We found that, overall, it proves how historical research on the topic is not merely interesting, but, more importantly, it provides the much needed means towards a re-conceptualization of ‘organised crime’. Critchley’s piece of work is essential reading not only for historians of crime, but also for sociologists and criminologists."

"This book is a well-written and well-researched account of the birth of American organized crime. It might be one of the most compelling and comprehensive discussions of this time period in mob history."

"Finally, a great book on the pre-history of La Cosa Nostra in the United States!"

1. Introduction 2. Black Hand, Calabrians, and the Mafia 3. "First Family" of the New York Mafia 4. The Mafia and the Baff Murder 5. The Neapolitan Challenge 6. New York City in the 1920s 7. Castellammare War and "La Cosa Nostra" 8. Americanization and the Families 9. Localism, Tradition, and Innovation

A former British public sector employee, David Critchley received his doctorate from Liverpool John Moores University, and is the author of the 1984 bibliography International Perspectives on Organized Crime and of articles in the journal Global Crime and Chronicle, the magazine of the Historical Society of Michigan. His book The Origin of Organized Crime in America: The New York City Mafia, 1891-1931 is the product of 10 years of research both in the United States and the United Kingdom.