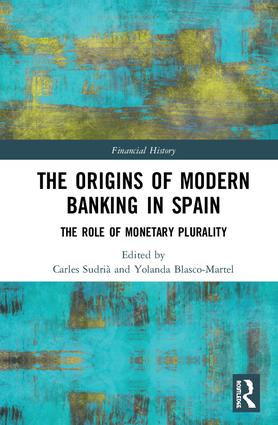 The Origins of Modern Banking in Spain

This book analyses the formation of the Spanish banking system. It provides a general overview of European financial systems in operation during the mid-nineteenth century, followed by a detailed analysis of the economic and institutional changes that gave rise to a new form of banking in Spain.

The chapters analyse changes on banking regulation; study the social origin of banks’ promoters; investigate the economic results of banks; and evaluate the interaction between banks and the economy as a whole. Finally, the causes, extent and consequences of monetary plurality in Spain and its European context are discussed. As such, this book covers the gap that exists in the Spanish banking historiography. Until now only the Bank of Spain and its predecessors had been adequately examined. As the Bank of Spain acted mostly as the state’s financial agent, we know very little about private-sector financing. This text provides data and analysis for a more comprehensive view of early Spanish financial development in a comparative European framework.

The Origins of Modern Banking in Spain should be considered essential reading for financial history students and scholars, as well as anybody interested in longview approaches to modern financial development.

Carles Sudrià is Professor of Economic History at the Universitat de Barcelona. He has published widely on financial history and the history of energy in Spain, and contributed to journals such as Business History, Financial History Review, European Review of Economic History and Revista de Historia Económica.

Yolanda Blasco-Martel is Associate Professor of Economic History at the Universitat de Barcelona. She has published on financial history, social history and business networks in Spain, and contributed to journals such as Business History, Atlantic Studies, Investigaciones de Historia Económica and Revista de Historia Industrial.