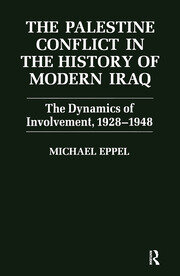 The Palestine Conflict in the History of Modern Iraq: The Dynamics of Involvement 1928-1948

The Palestine conflict constitutes one of the most prolonged and complex disputes of the twentieth century. It has consistently dominated Arab-Jewish relations and has in turn been affected by social, political and ideological tensions and struggles within the Arab states as well as within Israel. This book describes the influence and the functions of the Palestine conflict in the history of a modernizing Arab state.