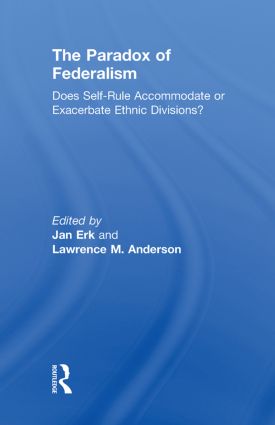 The Paradox of Federalism

The paradox of federalism is about whether self-rule accommodates or exacerbates ethnic divisions. A federal arrangement which formally recognizes ethno-linguistic diversity to help manage divisions can also pave the way for eventual disintegration. The case studies in this book cover a wide geographical basis (Canada, Scotland, Spain, Belgium, Bosnia, Kosovo, Russia, India, and Iraq) and seek to outline under what conditions federalism can deliver its promise of resolving ethnic conflict.

The book aims to bridge those who study federalism and decentralization in the developed world and those who study the politics of ethnic divisions in the developing world. We also wanted to bridge the scholarship from the two sides of the Atlantic, as well as the subfields of Comparative Politics, International Relations, and Constitutional Politics. Furthermore, the volume has a number of high-profile senior scholars with name recognition from both sides of the Atlantic.

The scope of the volume is wide – historically, methodologically, and geographically; and has relevance for the applied side as well as the theoretical literature. Consequently, we believe this is a timely collection on the high profile topic of Ethnic Conflict/Conflict Resolution.

1. The Paradox of Federalism: Does Self-Rule Accommodate or Exacerbate Ethnic Divisions? Jan Erk and Lawrence Anderson 2. Ethnofederalism and the Mismanagement of Conflicting Nationalisms Philip G. Roeder 3. The Political Dynamics of Secession and Institutional Accommodation Hudson Meadwell 4. Federalism in a Unitary State: a Paradox too Far? Stephen Tierney 5. The Partisan Logic of Decentralization in Europe Jason Sorens 6. The Paradox of Ethnic Partition: Lessons from de facto Partition in Bosnia and Kosovo Erin K. Jenne 7. State, Society and Separatism in Punjab Kristin M. Bakke 8. The Paradox of Federalism: Some Practical Reflections David Cameron

Lawrence M. Anderson teaches at the University of Wisconsin-Whitewater. His current research interest focuses on the link between federalism and secessionism. He is currently completing a book manuscript on federalism and secessionism in the antebellum American South. His work has appeared in the following journals: Regional and Federal Studies, Publius: The Journal of Federalism, Nationalism and Ethnic Politics, Theory and Society, and others.