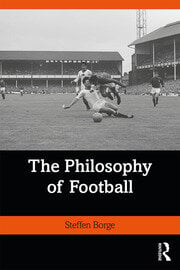 Human beings are the only creatures known to engage in sport. We are sporting animals, and our favourite pastime of football is the biggest sport spectacle on earth. The Philosophy of Football presents the first sustained, in-depth philosophical investigation of the phenomenon of football.

In explaining the complex nature of football, the book draws on literature in sociology, history, psychology and beyond, offering real-life examples of footballing actions alongside illuminating thought experiments. The book is organized around four main themes considering the character, nature, analysis and aesthetics of football. It discusses football as an extra-ordinary, unnecessary, rule-based, competitive, skill-based physical activity, articulated as a social (as opposed to natural) kind that is fictional in character, and where fairness or fair play – contrary to much sport ethical discussion – is not centre stage. Football, it is argued, is a constructive- destructive contact sport and, in comparison to other sports, is lower scoring and more affected by chance. The latter presents to its spectators a more unpredictable game and a darker, more complex and denser drama to enjoy.

deepens our understanding of the familiar features of the game, offering novel interpretations on what football is, how and why we play it, and what the game offers its followers that makes us so eagerly await match day. This is essential reading for anybody with an interest in the world’s most popular game or in the philosophical or social study of sport.

1. The Character of Football: This is Anfield

2. The Nature of Football: A Game of Two Halves

Conclusion: They Think It’s All Over

Steffen Borge is Professor of Philosophy at UiT The Arctic University of Norway, Tromsø.

"There are striking, fundamental similarities between sports and the arts and equally striking and fundamental differences. Some of them are surprising; few have been explored as thoroughly and perceptively as Borge does. The Philosophy of Football will certainly fascinate lovers of  "the beautiful game," but reflective aficionados of theatre or baseball, fiction or footraces, ritual, wrestling, chimpanzees, chess, dance, Duchamp, hockey and cockfights will find much of interest here as well." - Prof Kendall L Walton, University of Michigan, USA

"With Borges’ The Philosophy of Football, we have gained an analytically deep-drilling answer to the question of what football is … His approach to answering the question of what football is can advantageously be used in other sports as well. Such analyses are important, not least because, as Borge shows, there is probably no lowest common denominator for what could constitute sports in general. The Philosophy of Football is more than worth the effort." – Mats Franzen, Uppsala University, idrottsforum.org

"In his new book, The Philosophy of Football, Steﬀen Borge draws on some of his previous works to advance a comprehensive and highly sophisticated theoretical underpinning of football. As it turns out, however, the book is about much more than that. Although the study of football is central and discussed in-depth, the phenomenon and spectacle of football is throughout the book used as a springboard for more general considerations about sport, and the relationship between sport and other phenomena such as play, religion, and art. So, the book is arguably just as much a theory of sport as it is a philosophy of football … It is a signiﬁcant contribution to the philosophy of sport that will, for sure, inform critical debates about football and sport for years to come." – Kenneth Aggerholm, Norwegian School of Sport Sciences, Sport, Ethics and Philosophy

"In from the Arctic cold, literally, comes a Norwegian and tells us all how it all works. With his book The Philosophy of Football, Steffen Borge … has written the perhaps most important academic book on sport since the German literary theorist Hans Ulrich Gumbrecht's In Praise of Athletic Beauty ... The Philosophy of Football is empirically strong. The author knows his history of football ... In addition, Borge is pedagogically clear. His prose is understandable also for laymen. But most importantly, the author at all times watches his steps in a balancing act that never becomes a compromise: Sport has a core, but that core can change. Sport is both something we do and something we watch. Sport resembles art, but is something else." – Asker Hedegaard Boye, Weekendavisen