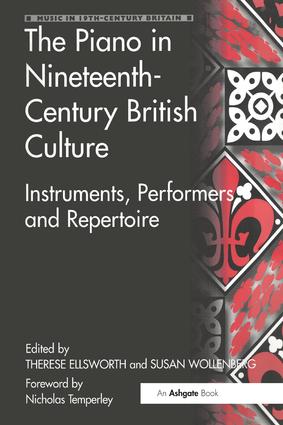 The Piano in Nineteenth-Century British Culture

Since the publication of The London Pianoforte School (ed. Nicholas Temperley) twenty years ago, research has proliferated in the area of music for the piano during the late eighteenth and nineteenth centuries and into developments in the musical life of London, for a time the centre of piano manufacturing, publishing and performance. But none has focused on the piano exclusively within Britain. The eleven chapters in this volume explore major issues surrounding the instrument, its performers and music within an expanded geographical context created by the spread of the instrument and the growth of concert touring. Topics covered include: the piano trade and how piano manufacturing affected a major provincial town; the reception of Bach's Well-Tempered Clavier and Clementi's Gradus ad Parnassum during the nineteenth century; the shift from composer-pianists to pianist-interpreters in the first half of the century that triggered crucial changes in piano performance and concert structure; the growth of musical life in the peripheries outside major musical centres; the pianist as advocate for contemporary composers as well as for historical repertory; the status of British pianists both in relation to foreigners on tour in Britain and as welcomed star performers in outposts of the Empire; marketing forces that had an impact on piano sales, concerts and piano careers; leading virtuosos, writers and critics; the important role played by women pianists and the development of the recording industry, bringing the volume into the early twentieth century.

Dr Therese Ellsworth is an Independent Scholar. Her doctoral dissertation, ’The Piano Concerto in London Concert Life between 1801 and 1850’ (University of Cincinnati, 1991) has led to further research, paper presentations and publications on nineteenth-century London concert life and women pianists in particular. She taught at universities in the US before settling for eight years in Brussels (1998 - 2006) and now lives in Washington, DC. Susan Wollenberg is Professor of Music at the University of Oxford, UK. She has published widely on subjects including C.P.E. Bach and Schubert, women composers, and the social history of English music, in particular the history of music in Oxford. She was co-editor, with Simon McVeigh, of Concert Life in Eighteenth-Century Britain (Ashgate, 2004).

So much of our ‘common’ knowledge of music in nineteenth-century Britain is bound up with received ideas. This series disputes their validity through research critically reassessing our perceptions of the period. Volumes in the series cover wide-ranging areas such as composers and composition; conductors, management and entrepreneurship; performers and performing; music criticism and the press; concert venues and promoters; church music and music theology; repertoire, genre, analysis and theory; instruments and technology; music education and pedagogy; publishing, printing and book selling; reception, historiography and biography; women and music; masculinity and music; gender and sexuality; domestic music-making; empire, orientalism and exoticism; and music in literature, poetry, theatre and dance.