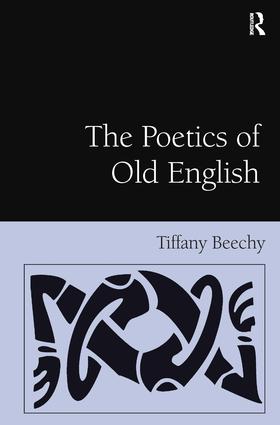 The Poetics of Old English

Combining literary analysis and theoretical linguistics, Tiffany Beechy's timely and engaging study provides a critical reassessment of Old English texts that challenges the distinction between Anglo-Saxon prose and verse, ultimately recognizing an inherent poetic nature present in all Old English texts. While the poetic nature of Beowulf, due to the regular meter and heroic story, is recognized, this study demonstrates that poetry is a more widespread phenomenon than previously thought; poetic patterning can be found across the Old English corpus, both in verse and in so-called prose. Informed by Jakobsonian linguistics and oral theory, Beechy's analysis focuses on the text itself to identify unique poetic strategies. This demonstration includes a comparison between King Alfred's Old English version of Boethius' Consolatio Philosophiae and the Latin original; the poetic quality of prose homilies; poetic epistemology in law codes, riddles, and charms; and unconventional poetics even in traditional verse texts, such as the short lyric 'Deor' and the long poem Christ I. The Poetics of Old English brings interrelated developments in linguistics and literary theory to the study of Anglo-Saxon language and culture, showing that Old English texts, when considered at the level of language, are surprisingly sophisticated.

'In The Poetics of Old English, Tiffany Beechy presents a well-crafted, thoughtful, wide-ranging, and frequently quite eloquent argument. This book carefully and deftly challenges some long and closely held assumptions about Old English poetry and prose and it should be of great interest to all students of Anglo-Saxon England.' Mark C. Amodio, Vassar College, USA '… a useful and stimulating contribution to current discussions of Old English aesthetics and the relationship between classical Old English verse and other classes of literary language in the vernacular…' The Medieval Review 'The strength of the book lies in its thorough and frequently spectacular close readings of moments in individual texts, which will be of great value and interest to teachers and scholars of the texts under consideration.' Review of English Studies 'Beechy’s approach to the persistently patterned nature of much Old English writing, by which she reframes many varieties of verbal and formal play as a trans-generic inclination to stress the Jakobsonian poetic function of discourse, has explanatory potential that I hope will be recognized.' English Studies 'The Poetics of Old English offers a compelling and valuable challenge to old assumptions. It reminds us of the importance of orienting ourselves to the texts (rather than orienting the texts to ourselves)� (19), something particularly difficult, and therefore particularly important, to do with things as fundamental as the definitions of poetry and prose.' Speculum

Tiffany Beechy is Assistant Professor of English at the University of Colorado-Boulder, USA.