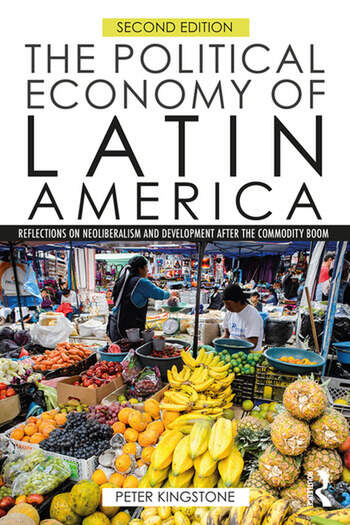 The Political Economy of Latin America: Reflections on Neoliberalism and Development after the Commodity Boom

This brief text offers an unbiased reflection on debates about neoliberalism and its alternatives in Latin America with an emphasis on the institutional puzzle that underlies the region’s difficulties with democratization and development. In addition to providing an overview of this key element of the Latin American political economy, Peter Kingstone also advances the argument that both state-led and market-led solutions depend on effective institutions, but little is known about how and why they emerge. Kingstone offers a unique contribution by mapping out the problem of how to understand institutions, why they are created, and why Latin American ones limit democratic development.

This timely and thorough update includes:

1. Markets, States, and the Challenge of Development in Latin America

2. Import-Substitution Industrialization and the Great Transformation in Latin America

3. Neoliberalism and its Discontents

4. Democracy, Development and the Pink Tide

[with Hélène Maghin and Eva Renon]

Peter Kingstone is Professor of Politics and Development and co-founder of the Department of International Development (with Andy Sumner) at King’s College London. He is also co-editor of the Democratic Brazil series (with Timothy J. Power), including Democratic Brazil Divided (University of Pittsburgh Press, 2017). He writes about the politics of economic reforms and democratic politics in Latin America.

'In the second edition of this admirably succinct text, Professor Kingstone develops the argument that weak institutions bear much of the responsibility for the erratic pace and uneven character of development during the past century in Latin America. The text provides cogent, impartial, and refreshingly plain-spoken analyses of import substitution industrialization, market reforms, the rise of the left, and the recent expansion of anti-poverty policies in the diverse countries of the region. Concise case studies illuminate the analyses, and Professor Kingstone gives special attention to twenty-first century international changes like the rising importance of Asian trade and investment. The text gives students the opportunity, in the space of a few class sessions, to acquire a firm grounding not only in the politics of Latin American development, but also in what institutions are, how they originate and change, and how specific institutions shape development policies and outcomes.' - James W. McGuire, Professor and Chair, Department of Government, Wesleyan University

'This is the most comprehensive and up-to-date book on Latin American political economy currently available. It is well written, intellectually provocative, and touches upon all the most pressing issues affecting the economies of Latin America today. Kingstone's institutional focus is insightful and provocative. It demonstrates the key role of socioeconomic institutions in shaping economic development, be it either state or market-led.' - Luigi Manzetti, Associate Professor of Political Science, Southern Methodist University

'An already impressive work is now, in its second edition, a more indispensable book. Peter Kingstone has written an authoritative account of Latin America's contemporary political economy. This overview of more than 100 years of development models has been updated to cover the region's more recent turn to the left with clear assessments of what worked, what didn't, and why. Kingstone does more than synthesize scholarly polemics. He advances the argument, in lucid prose and through well-selected data, that the debate should not be between more state or more market, but rather, which institutions are needed for states and markets not to malfunction. Kingstone's updated book should be mandatory reading for any student of development.' - Javier Corrales, Dwight W. Morrow 1895 Professor of Political Science, Amherst College

'Much has happened in the region since The Political Economy of Latin America was first published. The commodity boom has ended and the Left is in electoral retreat, yet their legacy is still not well understood. Kingstone’s timely update discusses the issues raised by these changes, broadening the book’s historical scope. In the process, he shows how his original arguments about the need to find an institutional balance between well functioning markets and well functioning states, avoiding past extremes of ‘too much market’ or ‘too much state,’ are even more compelling.' - Philip Oxhorn, Professor of Political Science, McGill University