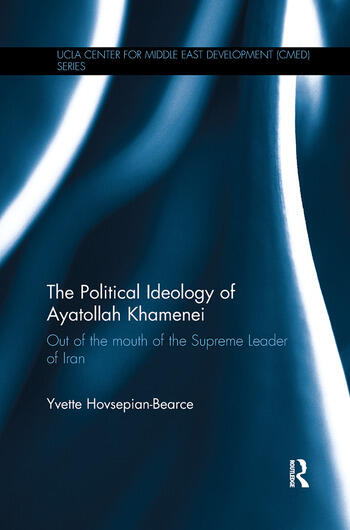 The Political Ideology of Ayatollah Khamenei: Out of the Mouth of the Supreme Leader of Iran

Ayatollah ʿAli Hosseini Khamenei, Supreme Leader of the Islamic Republic of Iran, is one of the most controversial and influential Muslim leaders in the world today. As Iran’s main decision-maker, his theocratic ideology and decisions carry global consequences.

The Political Ideology of Ayatollah Khamenei

is the first book to identify and analyze the development and evolution of the theocratic ideology of the Supreme Leader from 1962 to 2014, using his own writings, speeches, and biographies, as well as literature published in the Islamic Republic of Iran. This work provides new insights into Khamenei’s political thought and behavior and their impact on Iran’s domestic, regional, and international policies. Correlating the development of Khamenei’s personality, character, and political behavior with Iran’s internal and external challenges, this study explores key issues of the Middle East region, in particular Iran’s political posture toward Israel, the United States, and the Muslim world, and the diplomatic crises unfolding over Iran’s nuclear development program. This work provides a comprehensive chronological and thematic survey of Khamenei’s life.

This book will be of interest to students, scholars, researchers, diplomats, and policymakers focusing on Middle Eastern politics, Iranian affairs, Islamic studies, and international relations; and could serve as an essential resource for those striving to understand Iran’s policies toward Israel, the United States, and the Muslim world, as shaped by its supreme autocrat.

Yvette Hovsepian-Bearce is a Middle East scholar and researcher specializing in the role of Iran in contemporary world politics, and is a fellow at the Center for the Middle East Development at the University of California, Los Angeles. She earned a B.A. in Business, a Masters in Theology, and Ph.D. in Islamic Studies. Using her linguistic expertise in several Middle Eastern and European languages, she provides consulting services to various state and federal judiciaries.

[…] The Political Ideology of Ayatollah Khamenei, by Dr. Yvette Hovsepian-Bearce, reconstructs Ayatollah Khamenei's thought pattern on reaching this agreement which has major geopolitical implications.It is certainly critical for Americans to understand [Khamenei’s] vision regarding Iran's destiny as a revolutionary Islamic state and a beacon to the Muslim world. […] This is the first book to explore the underlying coherence of the ideological vision guiding the Supreme Leader’s exercise of ultimate power, and the first to present Khamenei’s political and religious worldview based on his speeches and writings. The author helps the reader to understand the critical choices Iran’s leadership is likely to face upon Khamenei’s passing. [and] carefully outlines the Supreme Leader's vision for Iran, the Muslim world, and the global community.

"Middle East scholar Yvette Hovsepian-Bearce provides a comprehensive evaluation of the theocratic ideology of the Supreme Leader of the Islamic Republic of Iran as it pertains to Iran's role as a world power and global influencer. By utilizing her translations of Ayatollah Khamenei's own speeches, writings and biographic materials, as well as additional literature published in the Islamic Republic of Iran, she offers students, politicians, researchers, policy-makers, and world leaders an opportunity to fully grasp Khamenei's personality, Islamic faith-based motivation, and global political agenda in a nuanced text that will prove illuminating to its readers."