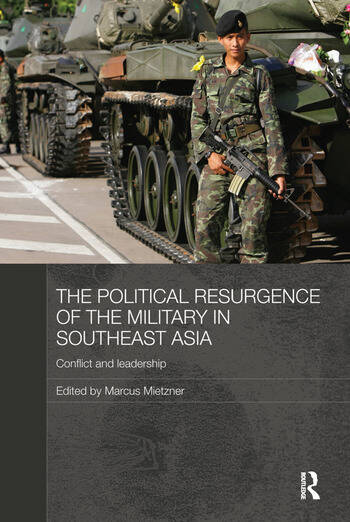 The Political Resurgence of the Military in Southeast Asia: Conflict and Leadership

In the late 1990s, prominent scholars of civil-military relations detected a decline in the political significance of the armed forces across Southeast Asia. A decade later, however, this trend seems to have been reversed. The Thai military launched a coup in 2006, the Philippine armed forces expanded their political privileges under the Arroyo presidency, and the Burmese junta successfully engineered pseudo-democratic elections in 2010.

This book discusses the political resurgence of the military in Southeast Asia throughout the 2000s.  Written by distinguished experts on military affairs, the individual chapters explore developments in Burma, Thailand, the Philippines, Vietnam, East Timor, Indonesia and Singapore. They not only assess, but also offer explanations for the level of military involvement in politics in each country. Consequently, the book also makes a significant contribution to the comparative debate about militaries in politics. Whilst conditions obviously differ from country to country, most authors in this book conclude that the shape of civil-military relations is not predetermined by historic, economic or cultural factors, but is often the result of intra-civilian conflicts and divisive or ineffective political leadership.

Marcus Mietzner is Senior Lecturer at the School of Culture, History and Language, College of Asia and the Pacific, Australian National University. He is the author of Military Politics, Islam, and the State in Indonesia: From Turbulent Transition to Democratic Consolidation.

"This useful little book of essays is a welcome addition to the literature on the subject." – Robert H Taylor, Asian Affairs, July 2012.