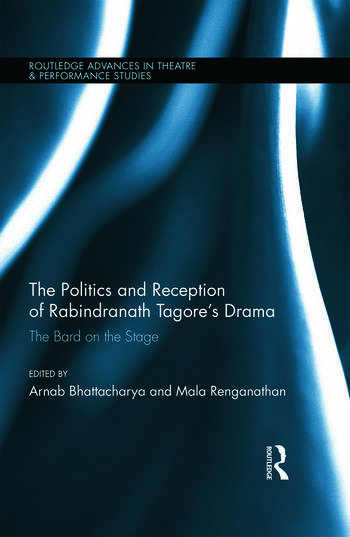 The Politics and Reception of Rabindranath Tagore's Drama: The Bard on the Stage

This is the first volume to focus specifically on Rabindranath Tagore’s dramatic literature, visiting translations and adaptations of Tagore’s drama, and cross-cultural encounters in his works. As Asia’s first Nobel Laureate, Tagore’s highly original plays occupy a central position in the Indian theatrescape. Tagore experimented with dance, music, dance drama, and plays, exploring concepts of environment, education, gender and women, postcolonial encounters, romantic idealism, and universality. Tagore’s drama plays a generous host to experimentations with new performance modes, like the writing and staging of an all-women play on stage for the first time, or the use of cross-cultural styles such as Manipuri dance, Thai craft in stage design, or the Baul singing styles. This book is an exciting re-exploration of Tagore’s plays, visiting issues such as his contribution to Indian drama, drama and environment, feminist readings, postcolonial engagements, cross-cultural encounters, drama as performance, translational and adaptation modes, the non-translated or the non-translatable Tagore drama, Tagore drama in the 21st century, and Indian film. The volume serves as a wide-ranging and up-to-date resource on the criticism of Tagore drama, and will appeal to a range of Theatre and Performance scholars as well as those interested in Indian theatre, literature, and film.

Arnab Bhattacharya is an internationally published critic, translator and a creative writer. His previous publications include Ghosts and Other Perils (2013), an English translation of hilarious stories by 19th century Bengali author, Troilokyonath Mukhopadhyay and Writing the Body: Studies in the Self-images of Women in Indian English Poetry (2014), an edited volume on the discourse of the body in Indian English poetry by women.