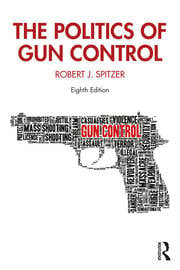 The new edition of this classic text covers the latest developments in American gun policy including the most recent shooting incidents that persist in plaguing the American landscape. Continuing a multi-decade trend, crime generally remains low throughout the US, but mass shootings have increased in both number and lethality, stoking greater support for gun laws among the public. Two seismic political events are highlighted in the eighth edition. The first is the ascendance of the gun safety movement, culminating in numerous electoral victories for gun law supporters in 2018 congressional and state races around the country. This outcome, which contributed to the Democrats’ capture of the House of Representatives for the first time since 2008, also demonstrates that support for stronger gun laws could be a winning issue for proponents in 2020 and beyond. The second political development featured is the financial, political, and legal crises that beset the nation’s oldest and most powerful gun group, the National Rifle Association. These crises are sufficiently grave that they may pose an existential threat to the organization’s traditional dominance in the realm of gun politics.

Author Robert J. Spitzer has long been a recognized authority on gun control and gun policy. His even-handed treatment of the issue--as both a member of the NRA and the Brady Center--continues to compel national and international interest, including appearances on major media such as the PBS NewsHour. The eighth edition of The Politics of Gun Control provides the reader with up-to-date data and coverage of gun ownership, gun deaths, school shootings, border patrols and new topics including universal background checks, limits on large capacity ammunition magazines, and "red flag" laws.

New to the Eighth Edition

Praise for the Eighth Edition

The latest edition of Robert Spitzer’s classic The Politics of Gun Control continues to provide an authoritative assessment of the many issues surrounding guns in America, and offers new commentary on the growing empirical literature as well as on some of the latest wrenching spasms of gun violence that continue to plague this country.  Most Americans have strong views on guns without having an equally strong understanding of the complex issues raised by the increasingly more deadly arsenal of weaponry in the hands of American civilians.  Better laws and policies would be in place if more voters would read and learn from Spitzer’s measured and insightful work.

Robert Spitzer deftly distills decades of firearm policy-making, court decisions, and interest-group mobilization into one readable volume. As a veteran observer of the great gun debate, Spitzer brings an expert knowledge and historical view that few other scholars can rival. This updated edition is a must-have for those interested not only in the past but also in the future of gun politics in the United States.

First published in 1995 and frequently updated, Robert Spitzer’s excellent work is my go-to book for gun control. It is the single best primer available on gun control, and this new edition should be first on any list of readings on the topic. Anyone with an interest in firearms—for whatever reason—must read this book.

Bringing a classic book like this one up to date is always an important event. In this new edition, Robert Spitzer moves seamlessly between legal, social, and political perspectives to deliver a comprehensive panorama touching all the significant and nuanced issues in the current gun debate.

is a classic work in American politics and policy. [It] continues to capture students’ imaginations (and those of faculty as well). Although arguments over gun control are frequently emotional, Robert Spitzer does his customary excellent job in providing a smart, clear-headed approach to an explosive issue.

Robert Spitzer’s The Politics of Gun Control remains the source for in-depth, thorough, and fair information and analysis for the politics of firearms in the United States. In the crisp and thoroughly readable narrative of this new edition, Spitzer takes his audience from the Founding Era to the time of Trump, providing valuable and thought-provoking insight at every stop along the way. A very important piece of work.

The Politics of Gun Control is well-researched and comprehensive, and—most importantly—accessible for modern students of public policy. Through the lens of gun policy, Robert Spitzer superbly captures the nuances, absurdities, and relative certainties of American public policy.