The Politics of Industrial Relations
Labor Unions in Spain 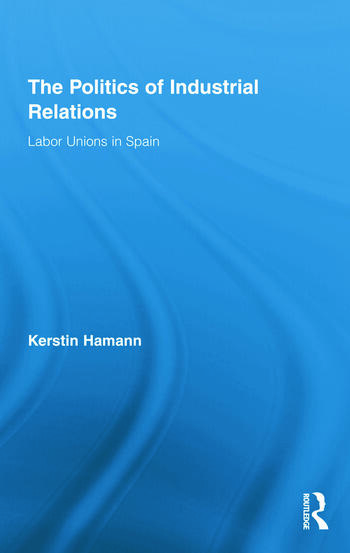 The Politics of Industrial Relations: Labor Unions in Spain

Comprehensive in its theoretical scope and empirical depth, The Politics of Industrial Relations presents Spain as an anomaly, and thus as a test case, for a multitude of theories developed in the political economy and industrial relations literatures.

1. Introduction: The Puzzle of Spanish Unions – A Framework for Analysis  2. Workers, the State, and Labor Relations under the Franco Regime  3. Unions and the Politics of Institution Building during the Transition to Democracy  4. Unions, Parties, and Industrial Relations during the Consolidation of Democracy  5. The Politics of Economic Adjustment under González’ Socialist Government  6. Socialist Policies, Union Decline, and Renewal Strategies  7. Labor Unions and Aznar’s Popular Government: Regaining a Political Voice?  8. Unions and Zapatero’s Socialist Government: Cooperation and Confrontation  9. Conclusion: Unions, Industrial Relations, and Politics in Spain

Kerstin Hamann is Professor of Political Science at the University of Central Florida. Her books include Parties, Elections, and Policy Reforms in Western Europe: Voting for Social Pacts (with John Kelly), Democracy and Institutional Development: Spain in Comparative Theoretical Perspective (with Bonnie N. Field), and Assessment in Political Science (with Michelle Deardorff and John Ishiyama).