The Politics of International Political Economy 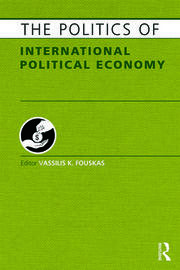 The Politics of International Political Economy

This timely book will explain, via a number of thematic and case studies, that international economics is not an independent terrain of economic activity reproducing itself throughout history, but a complex articulation of social, political and culturally determined actions that are inextricably linked. Chapters will address the role of dominant global powers in the making of global industrial and monetary relations, and, in particular, ways in which, and the degrees to which dominant economic and military powers, such as the USA, tend to shape the domestic economic environments of lesser powers after their own image.

This book will be ideal for researchers and students in the areas of politics, international relations and international economics, as well as for academics, economists, business people, and those with an interest in the workings of international political economy.

Vassilis K. Fouskas is a Professor of International Politics and Economics at the Royal Docks Business School and Director of STAMP (Centre for the Study of States, Markets and People), University of East London, United Kingdom. He is the founding editor of the Journal of Balkan and Near Eastern Studies (Routledge, quarterly) and the co-author of Greece, Financialization and the EU. The Political Economy of Debt and Destruction (London and New York, 2013)