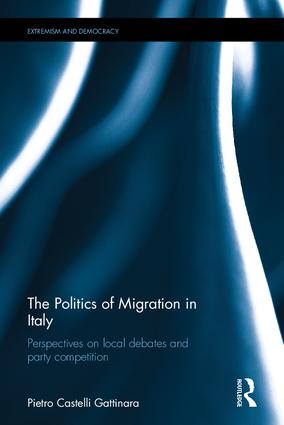 The Politics of Migration in Italy

Migration represents one of the key issues in both Italian and European politics, and it has triggered EU-wide debates and negotiations, alongside alarmist and often sensationalist news reporting on the activities of government, party and social movement actors.

The Politics of Migration in Italy

explores what happens when previously undiscussed issues become central to political agendas and are publicly debated in the mass media. Examining how political actors engage with the issue of migration in electoral campaigning, this book highlights how complex policy issues are addressed selectively by political entrepreneurs and how the responses of political actors are influenced by strategic incentives and ongoing events. This book studies the dynamics of the politicization of the immigration issue across three local contexts in Italy – Prato, Milan and Rome – which differ systematically with respect to crucial economic, cultural and security dimensions of immigration.

Offering an innovative exploration of party competition and migration in Italy, as well as providing the conceptual and analytical tools to understand how these dynamics play out beyond the Italian case, this book is essential reading for students, scholars and policymakers working in the areas of migration studies, agenda-setting and European politics more generally.

Pietro Castelli Gattinara is a Research Associate at the University of Leicester, UK.