The Politics of Military Families
State, Work Organizations, and the Rise of the Negotiation Household 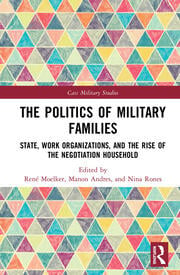 The Politics of Military Families: State, Work Organizations, and the Rise of the Negotiation Household

This book examines the politics of military families in relation to the tensions between the state, military organization, and private life.

It elaborates on the tensions between the advent of challenging worldwide deployment for the military and the prominence of the home front. The volume aims to understand the dynamics of conflict and change within triad figurations at the macro (society), meso (organizational), and micro (family) level and is guided by the following overarching research questions:

With contributions from international scholars, who examine the workings of politics in military families at all three levels, the book argues that members within military families deal with shifting power balances and these are impacted by demands from organizations and the state.

This book will be of much interest to students of military studies, sociology, organizational studies and politics.

Part I: State, Armed Forces, and the rise of the negotiation household

1. Introduction: The politics of military families and the rise of the negotiation household. Tensions between state, work, and families René Moelker, Nina Rones, and Manon Andres

4. Tensions and negotiations surrounding the inclusion of female officers in the Brazilian Air Force Laura Masson

5. The military family industry. The role of the family in the construction and the development of the military profession Elena Lysak

6. New families in the IDF: Towards diversity in family policies Meytal Eran-Jona and Dotan Aviram

7. "I just want to be done with it!" Estonian conscripts negotiating the tensions between military, family, and personal agendas Kadri Raid, Kairi Kasearu, and Tiia-Triin Truusa

9. The influence of work-family experiences during deployment on organizational outcomes Helen Pluut and Manon Andres

13. The spirit of community, the Army family, and the impact on formal and informal support mechanisms Emma Long

14. Who emotionally contained the deployed military? Trends in the dependence of former Argentine peacekeepers on their families, Haiti 2004-2015 Sabina Frederic

Part III: Inside the negotiation household: Tensions between the soldier-parent, the partner, children

16. ‘In the cross-fire.’ Intimate partner violence in military families: A narrative review and implications for the military organization Philip Siebler and George Karpetis

18. What happens on board stays on board? The political game of communication between deployed military personnel and their loved ones Manon Andres and René Moelker

20. Life situation of military fathers. Perspectives of family planning and fatherhood of officers in the Austrian Armed Forces Gottfried Reiter

21. Boots and bottles: Navigating the triumphs and challenges of early childhood in military families Catherine Mogil and Blair Paley

22. Epilogue: Dating from a distance. Love and separation in a networked society: Developing a triadic concept of the military family René Moelker and Manon Andres

René Moelker is an Associate Professor of Sociology at the Netherlands Defence Academy.

is an Assistant Professor at the Netherlands Defence Academy.

is a Senior Researcher at the Norwegian Defence Research Establishment.