The Politics of Regret
On Collective Memory and Historical Responsibility 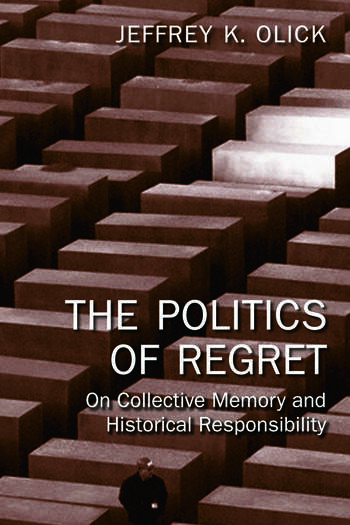 The Politics of Regret: On Collective Memory and Historical Responsibility

In the past decade, Jeffrey Olick has established himself as one of the world’s pre-eminent sociologists of memory (and, related to this, both cultural sociology and social theory). His recent book on memory in postwar Germany, In the House of the Hangman (University of Chicago Press, 2005) has garnered a great deal of acclaim. This book collects his best essays on a range of memory related issues and adds a couple of new ones. It is more conceptually expansive than his other work and will serve as a great introduction to this important theorist. In the past quarter century, the issue of memory has not only become an increasingly important analytical category for historians, sociologists and cultural theorists, it has become pervasive in popular culture as well. Part of this is a function of the enhanced role of both narrative and representation – the building blocks of memory, so to speak – across the social sciences and humanities. Just as importantly, though, there has also been an increasing acceptance of the notion that the past is no longer the province of professional historians alone. Additionally, acknowledging the importance of social memory has not only provided agency to ordinary people when it comes to understanding the past, it has made conflicting interpretations of the meaning of the past more fraught, particularly in light of the terrible events of the twentieth century.

Olick looks at how catastrophic, terrible pasts – Nazi Germany, apartheid South Africa – are remembered, but he is particularly concerned with the role that memory plays in social structures. Memory can foster any number of things – social solidarity, nostalgia, civil war – but it always depends on both the nature of the past and the cultures doing the remembering. Prior to his studies of individual episodes, he fully develops his theory of memory and society, working through Bergson, Halbwachs, Elias, Bakhtin, and Bourdieu.

1. Introduction  Part 1: The Sociology of Memory  2. Collective Memory: The Two Cultures  3. Collective Memory and Cultural Constraint: Holocaust Myth and Rationality in the Federal Republic of Germany  4. Genre Memories and Memory Genres: A Dialogical Analysis of May 8th, 1945 Commemorations in the Federal Republic of Germany  5. Figurations of Memory: A Process-Relational Approach  Part 2: The Politics of Regret  6. The Politics of Regret: Analytical Frames  7. The Value of Regret: Lessons from and for Germany  8. Collective Memory and Chronic Differentiation: Historicity and the Public Sphere  9.  From Theodicy to Ressentiment: Trauma and the Ages of Compensation

Jeffrey K. Olick is Professor of Sociology and History at the University of Virginia. His previous books include "In the House of the Hangman: The Agonies of German Defeat, 1943-1949" (Chicago 2005) and "States of Memory: Continuities, Conflicts, and Transformations in National Retrospection" (Duke 2003).

"Olick's book is imaginative, thorough, and demanding: it sparkles with facts, ideas, concepts, and fascinating historical dynamics. The presentation is powerful and persuasive. While the books offers one of the most interesting and holistic presentations of collective memory, it goes well beyond it - to the complex meanings of modernity."