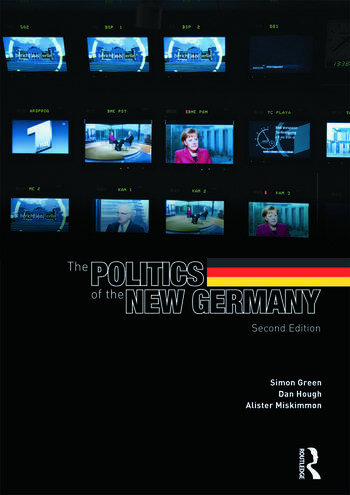 The Politics of the New Germany continues to provide the most comprehensive, authoritative and up-to-date textbook on contemporary German Politics. The text takes a new approach to understanding politics in the post-unification Federal Republic. Assuming only elementary knowledge, it focuses on a series of the most important debates and issues in Germany today with the aim of helping students understand both the workings of the country's key institutions and some of the most important policy challenges facing German politicians.

For this second edition, the content has been comprehensively updated throughout, augmented by additional factboxes and data, and features new material on:

Written in a straightforward style by three experts, each of the chapters draws on a rich variety of real-world examples. In doing so, it highlights both the challenges and opportunities facing policy-makers in such areas as foreign affairs, economic policy, immigration, identity politics and institutional reform. The book also takes a bird’s-eye view of the big debates that have defined German politics over time, regardless of which political parties happened to be in power. It pinpoints three key themes that have characterised German politics over the last sixty years; reconciliation, consensus and transformation.

The book is a comprehensive, yet highly accessible, overview of politics in 21st Century Germany and should be essential reading for students of politics and international relations, as well as of European and German studies.

Introduction  1. Germany and the Burden of History  2. Germany’s Post-War Development, 1945-1989  3. Towards German Unity?  4. A Blockaded System of Government? 5. Parties and Voters: The Path to Fluid Party Politics   6. Citizenship and Demographics: (Still) A Country of Immigration?  7. Economic Management: The End of the German Model?  8. Welfare Policy in Germany: Beyond Sustainability?  9. Germany and the European Union: From a Musterknabe to a Frustrated Lehrmeister?  10. Germany and the Wider World: Finding A New Role for the Twenty-First Century?  11. Conclusion: Three Themes Reassessed

Simon Green is Professor of Politics at Aston University. He has written widely on German politics, and especially on immigration and citizenship policy in Germany.

Dan Hough is Reader in Politics and Director of the Sussex Centre for the Study of Corruption at the University of Sussex. He has published widely on parties and party systems, devolution and constitutional change, and German politics.

Alister Miskimmon is Senior Lecturer in European Politics and International Relations at Royal Holloway, University of London. His research interests are in the field of German foreign policy, as well as wider European and global security issues.

‘This revised edition of The Politics of the New Germany, from a highly accomplished team of experts, combines depth of knowledge with a remarkably accessible format and a compact readability. It is authoritatively accurate and comprehensive. Simply put, it is now by far the single best text on modern German politics.’ - William Chandler, University of California, San Diego, USA

'This thematic treatment of contemporary Germany fills a much-needed gap in the student-oriented literature. The authors have succeeded in producing a fascinating and highly accessible account of all the key issues facing Germany today, making this book a 'must read' for any undergraduate student of German and European Studies.' - Paul Cooke, University of Leeds, UK

'The Politics of the New Germany strikes a perfect balance between the historical origins and evolution of the Federal Republic of Germany and the German Democratic Republic, the process and consequences of unification, and the future trajectory of a united Germany. Unlike many texts on German politics, the authors do not restrict their analysis to the domestic political and economic system, but instead present fully developed chapters on Germany’s role in the European Union and Atlantic Alliance that successfully establishes the critical linkages between domestic politics and foreign policy. The three themes tying the book together---reconciliation, consensus, and transformation and adaptation---provide an accessible framework for students and faculty alike. The authors join this thematic consistency with a uniformly crisp and clear writing style throughout. There is no better introductory textbook on German politics available today.' - James Sperling, University of Akron, USA

'It is about time an up-to-date textbook on German politics came out. Thankfully it is this one. The authors are a formidable team and have performed a fine balancing act well: making sure there is enough historical context to make sense of the peculiarities of German politics, while also organising the material under headings that connect with wider themes in comparative politics. The illustrative material is helpful, the writing excellent throughout, and the structure engaging. The thematic approach - on economic management, welfare reform, the EU, foreign policy - is used well to exemplify issues raised about the wider setting of German politics, its institutional structures and party system. There is no doubt that this book shoots straight to the top of the recommendation list for my students.' - Charlie Jeffery, University of Edinburgh, UK