The Populist Radical Left in Europe 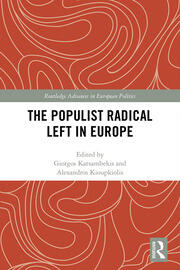 The Populist Radical Left in Europe

Building on a comprehensive theoretical framework that draws on discursive and ideational approaches to populism, this volume offers a comparative mapping of the Populist Radical Left in contemporary Europe. It explores the novel discursive, political and organisational features of several political actors, as well as the conditions of their emergence and success, while being alert to the role of relevant social movements.

Chapters feature case studies of the Greek party Syriza, the Spanish Podemos, the German Die Linke, Jean-Luc Mélenchon and France Insoumise, the Dutch Socialist Party and the Slovenian Levica. Jeremy Corbyn’s leadership of Labour in the UK and ‘Momentum’, the movement that supports him is also examined. A separate chapter is devoted to recent grassroots social movements that can be seen as instances of progressive populism, such as the ‘squares movement’ in Spain and Greece.

This book fills a crucial gap in the literature on radical left politics and populism in Europe, contributing to the rapidly burgeoning field of populism studies.

Introduction - The populist radical left in Europe Chapter 1 – The Populist Radical Left in Greece: Syriza in opposition and in power Chapter 2 – Late modern adventures of leftist populism in Spain: the case of Podemos, 2014-2018 Chapter 3 – Between populism and socialism: Slovenia’s Left party Chapter 4 – Jean-Luc Mélenchon and France Insoumise: the manufacturing of populism Chapter 5 – The Dutch Socialist Party: from Maoist sect to Social Democratic mass party with a populist style Chapter 6 – The German Left Party: A case of pragmatic populism Chapter 7 – Corbynism, Populism and the Re-shaping of Left Politics in Contemporary Britain Chapter 8 – Populism 2.0: New movements towards progressive populism Chapter 9 - Postscript: Populism, the (radical) left and the challenges for future research

Giorgos Katsambekis is a Lecturer in European and International Politics at Loughborough University. He has co-edited the volume Radical Democracy and Collective Movements Today (Ashgate 2014). His recent work has appeared in The Political Quarterly, Constellations, European Political Science, Javnost–The Public, Contemporary Political Theory, Critical Discourse Studies and The Journal of Political Ideologies.

is Assistant Professor of Contemporary Political Theory at Aristotle University, Thessaloniki, Greece. His research interests are focussed on radical democracy, the commons, social movements, and the philosophy of freedom. He is directing an ERC COG project on these topics (Heteropolitics, 2017–2020) and has published numerous relevant books and papers, including the monograph Freedom after the critique of foundations (Palgrave Macmillan 2012), and the collective volume Radical democracy and collective movements today (Ashgate 2014). His new monograph is entitled Τhe Common and Counter-hegemonic Politics (forthcoming, Edinburgh University Press 2019).

"Europe is changing at a fast pace and little attention has been given so far to the transformation of the left in the continent. This book addresses this research gap by offering detailed analyses of different cases of populist radical left forces across Europe. This is a must read for anyone who is interested in learning about the future of the populist radical left in Europe and beyond." - Cristóbal Rovira Kaltwasser, Universidad Diego Portales, Chile

"This volume focuses – for the first time – on the wide range of left-wing populist parties and movements in Europe in a very accessible way and provides both in-depth theoretical discussion as well as excellent empirical research. The introduction and the conclusion offer salient critical and comparative insights. Finally, the already inflationary concept of ‘populism’ is grounded on theoretical, historical and context-dependent analyses of manifold examples. A must-read for scholars and students in the Social Sciences!" - Ruth Wodak, Lancaster University, UK/University ofVienna, Austria

"This is a superlative and agenda-setting volume. Eschewing or skewering much of the hype about the ‘new left populism,’ it analyses left populism within a broader analytical and geographical perspective. It focusses on several key case studies, which include nuanced approaches to the ‘usual suspects’ (Greece and Spain), with some lesser known (Slovenia) or atypical cases (Corbyn’s Labour). The volume both situates the populist left within the study of the wider radical left, and within the wider theoretical undulations of theoretical approaches to populism. It both makes a case for the primacy of ideational/discursive approaches to populism, and highlights the particular applicability of Laclauian formalism. With a number of insightful and detailed chapters from leading scholars, this is a real tour-de-force, and a must for serious scholars both of the left and populism." - L