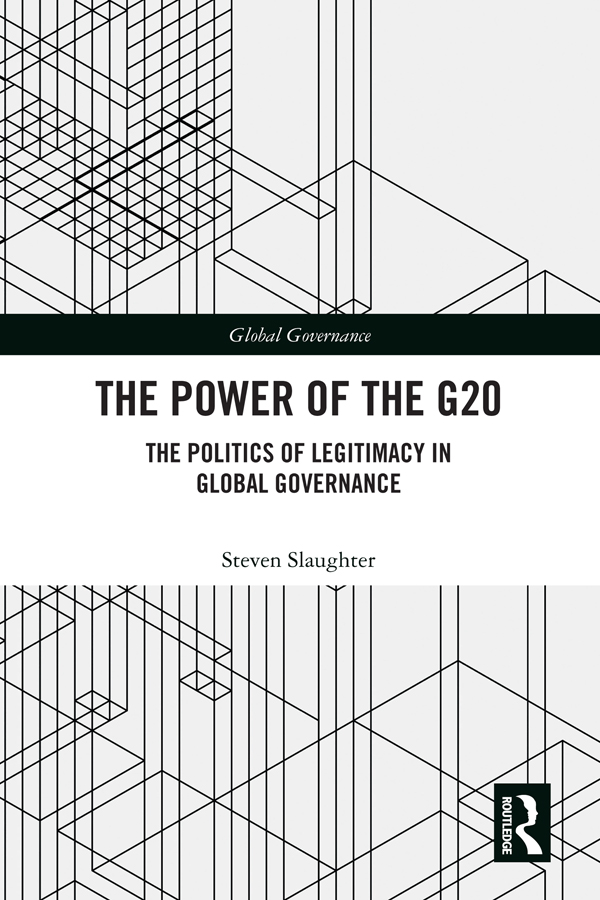 The Power of the G20

The Politics of Legitimacy in Global Governance, 1st Edition

Can the power of the G20 be legitimate? This book examines the politics surrounding the G20’s efforts to act effectively and legitimately and the problems and challenges involved in this activity.

Developing a critical constructivist conceptualisation of the G20, the book considers holistically and practically the ways that the G20 develops various forms of power and influence and acts as an apex form of global governance that seeks to be an overall coordinating forum to address global problems. Assessing how debates about the legitimacy of the G20 shaped its operation, Slaughter argues that the G20’s power can be legitimate despite a range of considerable challenges and limits. The book also explores what measures the G20 could take to be more legitimate in the future.

Offering a direct and accessible consideration of the politics of legitimacy with respect to the G20, this book will be of interest to those attempting to understand and analyse the G20 as well as to scholars of IR theory, global political economy, global policy, diplomacy and globalisation.

Introduction: legitimacy and the G20

1 The purpose and power of the G20

2 The legitimacy of the G20: international and public concerns

3 The G20 and the legitimation of global capitalism

4 The G20 and global social problems

5 The G20 and global justice and accountability

Steven Slaughter is an Associate Professor in International Relations at Deakin University, Melbourne, Australia. His main publications are The G20 and International Relations Theory: Perspectives on Global Summitry (solo edited, 2019), Global Democratic Theory: A Critical Introduction (authored with D. Bray, 2015), Democracy and Crisis: Democratising Governance in the Twenty-First Century (co-edited with B. Isakhan, 2014), Globalisation and Citizenship: The Transnational Challenge (co-edited with Wayne Hudson, 2007) and Liberty Beyond Neo-liberalism: A Republican Critique of Liberal Governance in a Globalising Age (2005). He has authored more than 30 articles and chapters in journals such as the Review of International Studies, Global Policy, Global Constitutionalism and Global Summitry. His research interests focus on globalisation and global governance, with a particular interest in political theory, transnational activism and the G20.

Global governance is growing rapidly to meet the compounding challenges of a globalized 21st-century world. Many issues once dealt with largely at the local, national or regional level are now going global, in the economic, social and political-security domains. In response, new and renewed intergovernmental institutions are arising and adapting, multilevel governance is expanding, and sub-national actors are playing a greater role, and create complex combinations and private-partnerships to this end.

This series focuses on the new dynamics of global governance in the 21st century by:

In all cases, it focuses on the central questions of how global governance institutions and processes generate the effective, legitimate, accountable results required to govern today’s interconnected, complex, uncertain and crisis-ridden world.