The Practical Guide to HIPAA Privacy and Security Compliance

The Practical Guide to HIPAA Privacy and Security Compliance

Following in the footsteps of its bestselling predecessor, The Practical Guide to HIPAA Privacy and Security Compliance, Second Edition is a one-stop, up-to-date resource on Health Insurance Portability and Accountability Act (HIPAA) privacy and security, including details on the HITECH Act, the 2013 Omnibus Rule, and the pending rules. Updated and revised with several new sections, this edition defines what HIPAA is, what it requires, and what you need to do to achieve compliance.

Preparing for HIPAA, HITECH , and Other Compliance Changes
Background
Managing Change
Creating the Mind-Set
It Is Up to You
Practical Checklist

Kevin has appeared on CNN as an information security expert and has been quoted in The Wall Street Journal, Entrepreneur, Fortune Small Business, Men’s Health, Women’s Health, Woman’s Day, and Inc. Magazine. His work has also been referenced by the PCI Security Standards Council in their PCI DSS Wireless Guidelines. He has given and participated in hundreds of highly rated presentations, panel discussions, seminars, and webcasts on information security and compliance.

Kevin has authored or coauthored 11 information security books, including Hacking For Dummies and Hacking Wireless Networks For Dummies (Wiley) as well as Implementation Strategies for Fulfilling and Maintaining IT Compliance (Realtimepublishers.com). He has written dozens of whitepapers and hundreds of articles and guest blog posts, and he is a regular contributor to SearchSecurity.com, SearchEnterpriseDesktop.com, SearchWindowsServer.com, and Security Technology Executive magazine.

Kevin is the creator and producer of the Security On Wheels audiobooks, which provide security learning for IT professionals on the go (http://www.securityonwheels.com) and its associated blog (http:// www.securityonwheels.com/blog). He also covers information security and related matters on Twitter (@kevinbeaver) and YouTube (PrincipleLogic). He earned his bachelor’s degree in computer engineering technology from Southern College of Technology and his master’s degree in management of technology from Georgia Tech. He obtained his CISSP certification in 2001 and also holds MCSE, Master CNE, and IT Project+ certifications.

Kevin can be reached through his website (http://www.principlelogic.com) and invites you to connect to him via LinkedIn (http://www.linkedin.com/in/kevinbeaver).

Rebecca Herold has over 25 years of information privacy, security, and compliance expertise. She is CEO of Privacy Professor® and is a partner for Compliance Helper®. She has led the NIST SGIP Smart Grid Privacy Subgroup since June 2009. She has been an adjunct professor for the Norwich University Master of Science in Information Security and Assurance (MSISA) program since 2005. She has written 17 books and hundreds of published articles. She has been invited to speak at a wide variety of events throughout the United States, and in other worldwide locations such as Melbourne, Australia; Bogotá, Colombia; and Naas, County Kildare, Ireland.

Rebecca is widely recognized and respected, and has been providing information privacy, security, and compliance services, tools, and products to organizations in an extensive range of industries for over two decades. Just a few of her awards and recognitions include the following:

Rebecca is a partner for the Compliance Helper services for health-care organizations and their business associates to meet their HIPAA, HITECH, and other legal requirements. She is a member of the IAPP Certification Advisory Board, and is an instructor for the IAPP’s CIPM, CIPP/IT, CIPP/US, and CIPP foundations classes.

Rebecca was born and raised in Missouri and has degrees in math, computer science, and education. She has lived in Iowa on a farm with her family for the past couple of decades, where they raise corn, soy beans, and sunflowers, and make hay. They are currently renovating a house that is over 100 years. See more about Rebecca, her work, services, and products at:

Praise for the New Edition:

The HIPAA regulations are transforming how providers and insurers think about the individually identifiable health information they create and receive every minute of every day. ... There is a potential for serious harm to service levels and even to patient health if misunderstandings as to the dictates of these regulations choke off the exchange of patient-health information. This guide is a good step toward erasing many of those misunderstandings. I commend the authors for their fine efforts at translating a difficult subject into practical terms.
—Mark Lutes, Chairman, Epstein Becker Green, Washington, DC

Praise for the Bestselling First Edition:

The book's main strength is its abundant and varied content. It thoroughly describes the main provisions of HIPAA's security and privacy requirements using actual language from the legislation interspersed with the authors' commentary. This format…helpfully guides readers through the labyrinthine HIPAA requirements.
—Scott Forbes, Microsoft

Rebecca and Kevin have compiled a wealth of knowledge in an easy-to-read, conversational style. This book is packed with useful facts and practical tips that grabs and keeps your attention as though you are listening to the authors in your own living room. The astute reader will keep a pad of paper and a pile of 'sticky notes' handy. You will no doubt come back to this valuable resource over and over again!
Michael J. Corby, CCP, CISSP, President and CEO, M. Corby & Associates, Inc.

This is a very comprehensive view of HIPAA privacy and security compliance which provides a pragmatic, step by step methodology for understanding and complying with the regulation. The practical checklists, the quizzes which
can be used in HIPAA awareness programs, and the pointers to valuable resources are all added benefits.
Micki Krause, CISSP, Chief Information Security Officer, Pacific Life Insurance 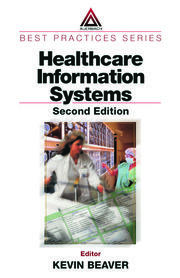 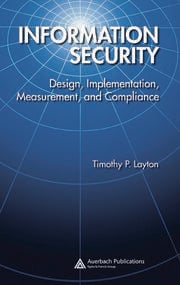 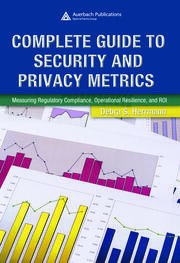