The Practitioner's Guide to POLCA
The Production Control System for High-Mix, Low-Volume and Custom Products 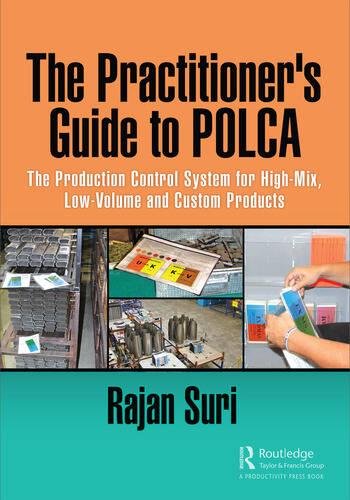 The Practitioner's Guide to POLCA: The Production Control System for High-Mix, Low-Volume and Custom Products

POLCA (Paired-cell Overlapping Loops of Cards with Authorization) is a card-based visual control system that manages the flow of jobs through the shop floor: at each operation, it controls which job should be worked on next to meet delivery targets. POLCA ensures that upstream operations use their capacity effectively by working on jobs that are needed downstream, while at the same time preventing excessive work-in-process (WIP) build-ups when bottlenecks appear unexpectedly.

POLCA is particularly suited to companies manufacturing high-mix, low-volume and customized products. Such companies struggle with long lead times, late deliveries, and daily expediting to meet delivery dates. ERP systems are not designed to deal with this highly variable environment, and add-on software such as Finite Capacity Scheduling systems can require complex installation. Also, the Kanban system does not work well with low-volume or custom production. POLCA has delivered impressive results in such environments. It does not require any complex software implementation: it can be used without an ERP system or it can seamlessly complement an existing ERP system.

Rajan Suri is Emeritus Professor of Industrial Engineering at the University of Wisconsin-Madison. He received his Bachelors degree from Cambridge University (England) and his M.S. and Ph.D. from Harvard University.

Dr. Suri is the inventor of the POLCA system and published the first description of POLCA in his book Quick Response Manufacturing: A Companywide Approach to Reducing Lead Times (Productivity Press, 1998). Dr. Suri is also the author of over 100 technical publications and several other books including It’s About Time: The Competitive Advantage of Quick Response Manufacturing (Productivity Press, 2010).

Professor Suri is the Founding Director of the Center for Quick Response Manufacturing (QRM) at the University of Wisconsin-Madison, a consortium in which around 300 companies have worked with the University on understanding and implementing QRM strategies. He is internationally regarded as an expert on the analysis of manufacturing systems, and served as Editor-in-Chief of the Journal of Manufacturing Systems.

Professor Suri has received awards from the American Automatic Control Council, The Institute of Management Sciences, and the IEEE. In 1999, Dr. Suri was made a Fellow of the Society of Manufacturing Engineers (SME), and in 2006 he received SME’s Albert M. Sargent Progress Award for the creation and implementation of the QRM strategy.

In 2010, Dr. Suri was one of only 10 people to be inducted into the Industry Week 2010 Manufacturing Hall of Fame for the development of QRM and for his long-standing efforts in helping U.S. manufacturers stay competitive in the global marketplace.

You can keep up to date on Professor Suri’s activities and publications through his website: rajansuri.com.

"When POLCA was introduced, theoretical situations in which the system would fail were used to criticize it. Twenty years later, as shown in the book, the system has proven to be much more flexible and adaptable than originally thought. If you are considering implementing POLCA, reading Suri’s new book with many examples, implementation guidelines and possible adaptations, therefore is a good idea. Everything is explained in plain language. (...) My conclusion regarding the book: The Practitioner’s Guide to POLCA is a very good and comprehensive book about POLCA and its possibilities and prerequisites (...)"

"We had struggled to implement a pull system for our high-mix, low-volume products. Through implementing POLCA we dramatically reduced our work-in-process (WIP), freeing up cash and creating additional space for manufacturing. In addition, our internal chaos decreased, and customer satisfaction and profitability increased."

"Dr. Suri has created a truly innovative alternative to Kanban for companies that do non-repetitive work in small batches rather than in automotive-style volumes. This book gives clear direction to manufacturers so they can implement POLCA to dramatically improve the way they meet their customers' needs now and for years to come."