The Present State of Russia Vol. 2 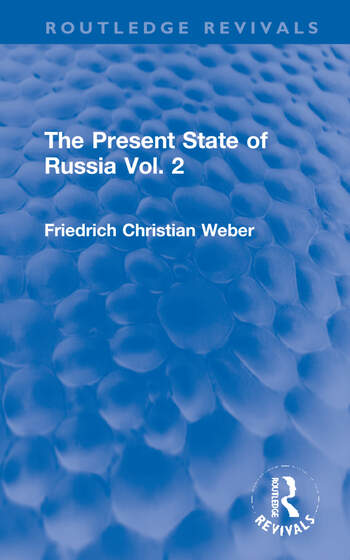 The Present State of Russia Vol. 2

Published in 1968, this second volume embarks on the journeys of Laurence Lang, and Le Brun through Russia and other countries. Weber also delves into the criminal proceedings against the late czarewitz, the justification of the Swedish war against Russia and many more topics involving the politics and government of Russia as a country through European eyes.

1. Laurence Lange's Journey from Petersbourg to Peking in China  2. John Bernard Muller's Description of the Ostiacks, a Nation in Siberia  3. The Criminal Proceedings Against the Late Czarewitz, as Published by Authority  4. Justification of the Swedish War Against Russia, and the Answer to it Drawn Up by a Russian Minister of State  5. A Project Offered to His Czarish Majesty by Some Doctors of the Sorbone at Paris, for an Union Between the Churches of Rome and Russia  6. M. Le Brun's Observations on His Journey Through Russia to Persia.