The Price of Love
The selected works of Colin Murray Parkes 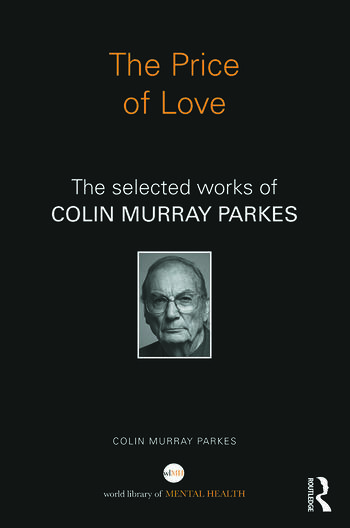 The Price of Love: The selected works of Colin Murray Parkes

In the course of a long career Colin Murray Parkes, one of the most important and influential psychiatrists working in the field of bereavement and loss, has produced a body of work which can be considered truly ground-breaking. His early studies involved working alongside John Bowlby in the development of attachment theory and led to his pioneering work on the Harvard Bereavement Project in the USA and at the new St Christopher's Hospice in Britain. Parkes focussed on two psychological processes, grief, which is the painful search for a lost person or object of attachment, and transition, which is the process of changing the assumptive world in ways that ensure that nothing worthwhile need be completely lost. Out of the struggle to resolve the conflict between holding on and letting go of the old assumptions there gradually emerges a new and more mature model of the world.

These ideas throw light on a wide range of life change events and have proved useful to people faced with bereavement, physical disabilities, dying, disasters and even terrorist attacks. In recent years he has supported humanitarian efforts in countries including Rwanda, India and Japan. Parkes’ career has spanned several decades and touched countless lives. In The Price of Love, Parkes presents papers which span the full extent of his career, covering and linking together our understanding of the five major areas of his work:

- War and terrorism: breaking the cycle.

The papers included here have been carefully selected and annotated to show how Parkes’ thinking has developed during a career as researcher, practitioner and educator. In each section of the book psychological and social causes are paired with consequences and interventions (both preventive and therapeutic) and explored from Western and cross-cultural perspectives, all with Parkes’ customary clarity and compassion.

This unique collection of papers will prove invaluable to psychologists, psychiatrists, palliative care staff, counsellors and students, as well as those studying international conflict and working with the bereaved.

Foreword. Acknowledgements. Introduction. Part 1. Love and Grief. 1. Introduction. 2. "Seeking" and "Finding" a Lost Object: Evidence from recent studies of the reaction to bereavement. 3. Comments on Dennis Klass' Article "Developing a Cross-Cultural Model of Grief". 4. Evaluation of a Bereavement Service. 5. Broken Heart: A Statistical Study of Increased Mortality Among Widowers. 6. Guidelines for Conducting Ethical Bereavement Research. 7. Bereavement: Understanding Grief across Cultures. 8. Introduction (pp.1-6) and Conclusions (pp. 272-8) from Love and Loss: The Roots of Grief and its Complications. 9. Complicated Grief: The debate over a new DSM-V Diagnostic Category. 10. Dangerous Words. Part 2. Crisis, Trauma and Transition. 11. Psychiatric Problems following Bereavement by Murder or Manslaughter. 12. Psychosocial Transitions: A field for study. 13. What Becomes of Redundant World Models? 14. Bereavement Dissected: A re-examination of the basic components influencing the reaction to loss. 15. Assumptions about Loss and Principles of Care. 16. An Experiment that Failed: Services for Families in Crisis in Tower Hamlets: Perception of a crisis service by referrers and users. Part 3. Death and Dying. 17. Attachment and Autonomy at the End of Life. 18. Terminal Care: Evaluation of in-patient service at St Christopher's Hospice. Part 4. Disasters. 19. Bereavement following Disasters. 20. Psychosocial Effects of Disaster: Birth Rate in Aberfan. 21. Help the Hospices Tsunami Project: Consultant’s Report and Recommendations. Part 5. War and Terrorism - Breaking the Cycle. 22. Grief and Reconciliation. 23. Genocide in Rwanda: Personal Reflections. 24. Reflections on Cruse' Response to 9/11. 25. Making and Breaking Cycles of Violence. 26. Terrorism. Final Conclusions.

Colin Murray Parkes, OBE, MD, FRCPsych, DL, is a psychiatrist, researcher and clinician who has pioneered development of psychological support for families facing the death of a family member. His recent work has focussed on traumatic bereavements with special reference to violent deaths, armed conflict and the cycle of violence. He is the author and editor of six previous books, including most recently Responses to Terrorism (Routledge, 2014).

"Useful features include the author's new prefaces to each paper, reflective postscripts, and introductions to each section, setting the work in a wider context and showing how his thinking developed with time." - Roslyn Byfield, Private Practice

"This is a fascinating selection of Colin Murray Parkes’ favourite and most influential articles and chapters. The volume provides unique historical insights into the evolution of what was in the seventies a newly emerging field of study and clinical engagement and underlines Colin Murray Parkes’ pre-eminent role within it." - Professor Dame Barbara Monroe, from the foreword

"Colin Murray Parkes is the undisputed father-figure in the field of bereavement. His contributions to research and care are simply magnificent. This selection of his papers gives a sense of the breadth of his contribution to both the scientific knowledge base and clinical practice across many decades. It makes his work more easily accessible, ensuring that future generations also appreciate his remarkable career and the far-reaching scope of his work." - Margaret Stroebe, Professor of Bereavement and Loss at Utrecht University, The Netherlands

"Here, we get to sample nearly a half century of the pioneering work of Colin Murray Parkes... The Price of Love... is a significant contribution to the field. Most interesting it shows the continued development of Colin Murray Parkes' work... For those unfamiliar with the published work of Parkes, this collection offers a wide itnroduction to his work and to the field of grief  studies. For those appreciative of Parkes' long and continuing contribution, these are a compendium of some of his best writings." - Kenneth J. Doka, The College of New Rochelle and Senior Consultant, Hospice Foundation of America, OMEGA - Journal of Death and Dying