The Proceedings Against the Templars in the British Isles
Volume 2: The Translation 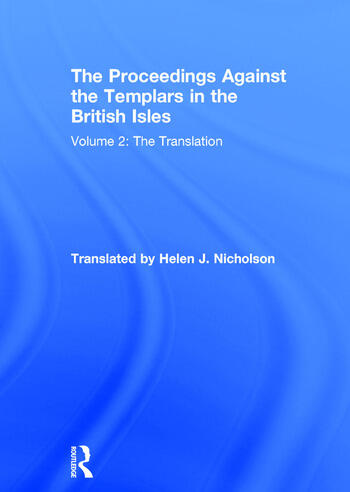 The Proceedings Against the Templars in the British Isles: Volume 2: The Translation

In October 1307 all the brothers of the military religious Order of the Temple in France were arrested on the instructions of King Philip IV and charged with heresy. In November, Pope Clement V instructed King Edward II of England to do likewise. This volume provide the first full translation of the four surviving texts of the trial proceedings that followed in Britain and Ireland, complementing the edition published in volume 1. The trial of the Templars was the first major heresy trial in the British Isles, and the proceedings reveal the Episcopate's attempts to deal with this unprecedented situation, the varying procedures followed in different countries, and how testimonies were recorded and summarised for the Church Councils which eventually decided the fate of the Order of the Temple. The testimonies given during the trial contain a wealth of information about religious beliefs among the lay population of the British Isles (both the Templars and outsiders who gave evidence during the trial), national and international mobility of lay religious, the social function of the order of the Temple in the British Isles and its relations with society at large, and the organisation and operations of the Order of the Temple at a local, national and international level. Detailed introductions to each volume describe the manuscripts and how the material was compiled and arranged, and discuss the course of the proceedings and the value of the evidence they contain. Appendices in this volume also list the names of all the Templars mentioned during the proceedings, Templar houses and the locations of the proceedings in London.

Contents: Introduction to the translation: The trial of the Templars in the British Isles - a survey; The trial testimonies as historical evidence; Conclusion. Oxford, Bodleian Library, MS Bodley 454 (MS A), collated with London, British Library, Cotton MS Julius B xii (MS B): Introductory matter, charges against individual persons, initial testimonies at London; Names of the Templars sent to the Tower of London, from various Counties; These are the charges on which clergy and laity are to be interrogated; Twenty-four new charges on which individual Templars were re-questioned and examined; Requestioning at London on four charges; Requestioning of the Templars at London on the remission and absolution of sins in their Chapter meetings; Charges which seem proven and warranted by the inquisitors, with the depositions of certain witnesses; Extracted from the proceedings of the bishop of Clermont concerning Brother Himbert Blank, commander of the Auvergne; Memorandum regarding the Templars' defence; Proceedings against individual persons at Lincoln; 28 charges on which the Templars of Lincoln were requestioned at London; Depositions of the Templars in the province of York; Here begin the proceedings in Ireland brought against individual persons of the Order of the Temple; Special inquisition against the Templars in Ireland; Scotland; Extract from the Templars' rule; Confessions of Brothers Stephen of Stapelbrugge, Thomas Totti and John of Stoke. London, British Library, Cotton MS Julius B xii (MS B), documents not Included in Oxford, Bodleian Library, MS Bodley 454 (MS A); Vatican, Archivo Segreto Vaticano, ARMARIUM XXXV, 147 (MS C); British Library Additional MS 5444, fols 174r-192r (MS D), collated with the surviving fragments of British Library Cotton MS Otho B iii, fols 29r-31v, 33r-34v, 36; Appendices: Templar brothers mentioned in the records of the trial proceedings in the British Isles; Templar properties in the British Isles mentioned in the trial proce

'Both editor and publisher are to be congratulated on publishing these volumes, which are works of significant scholarship and an addition to the printed corpus of medieval texts.' Catholic Historical Review 'This excellent edition has once again confirmed Helen Nicholson’s status as a foremost authority on the history of the Crusaders’ Military Orders... the present edition is an absolute delight in its unravelling of the rich and colourful textual material that shaped the ’prosecution’s case’ against the Order.' Oxford Journal of Law and Religion 'With these two volumes, Helen Nicholson confirms and enhances her reputation as the foremost historian of the Templars’ activities within the British Isles... The appendices and footnotes constitute in themselves almost an encyclopaedia of the British Templars as they were on the eve of the Order’s dissolution. Hers is work that will never need to be done again.' English Historical Review '... the present edition and translation is a much welcome addition to the growing body of edited Templar sources, and one for which the editor must be congratulated... This is an edition of the highest standard, thoughtfully executed and provided with a translation that remains close to the original text. It can be expected that it will inspire new research into a religious order that never ceases to fascinate.' History '...Nicholson's monumental work is of enormous value to scholars working on the Templar trial, medieval Latin texts, and medieval society in general. This work is a welcome addition to the corpus of medieval texts available in transcription and translation.' Ordines Militares