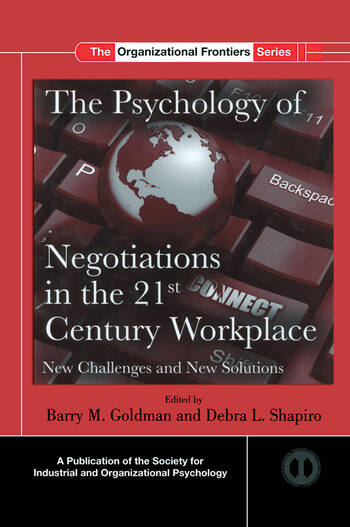 The Psychology of Negotiations in the 21st Century Workplace: New Challenges and New Solutions

The "litigation explosion" in the 21st century workplace means increasing costs and risks of lawsuits. Negotiation appears the attractive alternative to litigation. This new volume, with contributions from experts in psychology, management, and other disciplines, bridges the gap between management and negotiation research. Managers, students, and researchers interested in the field of negotiation will find this new book in SIOP’s Organizational Frontiers series of interest.

Part 2: Negotiators as Fairness-Managers in the 21st Century

2. The Effect of Perceived/Felt (In)Justice on Cooperativeness: Implications for Negotiators as 'Justice-Enhancing Communicators' in an Era of Social Networking D. Conlon, W. Ross

3. The Role of Process Fairness Authenticity in Negotiations and Its Challenges for 21st Century Negiotiators  K. Roloff, J. Brockner, B. Wiesenfeld

4. The Effect of Perception on Judgements about "Fair" Compensation: Implications for Negotiators as Price Justifiers R. Pinkley

Part 3: Negotiators as Emotion-Managers in the 21st Century

7. Negotiating the Peace in the Face of Modern Distrust: Dealing with Anger and Revenge in the 21st Century Workplace R.J. Bies, T. Tripp

Part 4: Negotiators as Social-Influence/ Group-Sensitive Managers in the 21st Century

Part 5: Negotiators as Organizational-Managers in the 21st Century

15. Negotiating in a Brave New World: Challenges and Opportunities for the Field of Negotiation Science M. Gelfand, Y. Gal

Dr. Barry M. Goldman is an Associate Professor and the McCoy-Rogers Fellow at the University of Arizona where he has taught courses in negotiations, conflict management, human resource, and organizational behavior for MBA, doctoral students, and undergraduates for the past 10 years. Prior to that time, he was a practicing attorney. He has also taught negotiations at the Tuck School of Business at Dartmouth, the for numerous executive education programs in the United States and China. He is currently serving a five-year term as Chair-Elect of the Conflict Management Division of the Academy of Management. His research has been recognized with three "Best Paper" awards and as the 40th most cited author in the field of management in the most recent five-year period (Journal of Management, 2008). He was also named "Ascendent Scholar" by the Western Academy of Management. Presently, he serves on editorial boards of the Journal of Applied Psychology, Journal of Management, and Negotiation and Conflict Management Research. His research has appeared in The Wall Street Journal, Inc Magazine, and in the Dalai Lama’s, The Art of Happiness at Work.

Dr. Debra L. Shapiro is the Clarice Smith Professor of Management at the University of Maryland’s Robert H. Smith School of Business and Associate Dean of Ph.D. Programs where she has taught negotiations, general management, cross-cultural management, and leadership courses for students in the undergraduate, MBA, and doctoral program; she is a recipient of the prestigious 2007 Krowe Teaching Award at the Smith School and a recipient of the "Best Paper Award" from the Academy of Management’s Conflict Management Division in 1991, 1992, 1996, and 2007, and from the International Association for Conflict Management in 1999. Prior to joining the Smith School in 2003, Dr. Shapiro was the Willard J. Graham Distinguished Professor of Management at the University of North Carolina-Chapel Hill’s Kenan-Flagler Business School where she served on the faculty 1986-2003 and taught general management and negotiation-courses and served as Associate Dean from 1998-2001. Dr. Shapiro is a past Chair of the Conflict Management Division of the Academy of Management (AOM) after serving in all executive board positions (starting with Representative-at-Large), past member of the AOM’s Board of Governors (2002-2005), and past Associate Editor of The Academy of Management Journal (2005-2007). Additionally, Dr. Shapiro is senior editor of the book Managing Multinational Teams: Global Perspectives (published in 2005 by JAI/Elsevier Press) and author of over 65 refereed journal articles and book chapters, some of which have been among the handful selected for inclusion in the Worldwide Fortune Luminary Series (featuring world-renowned management thought-leaders such as Jack Welch, Tom Peters, Stephen Covey, Carly Fiorina, Rudy Giuliani, and others).

"An amazing volume with chapters and commentaries written by the very top negotiation scholars in the world. The book reviews and integrates state-of-the-art research and develops implications for the future of the negotiation field. It gives insightful, practical implications addressing many of the most challenging issues of the 21st century, i.e. how to negotiate agreements in an era of globalized competition, emerging and crisis economies, increased national and other cultural-diversity in the workplace, and frame-breaking, new technologies that often serve as channels of communication. Don't overlook this one!" - M. Susan Taylor, Smith Chair of Human Resource Management & Organizational Change & Co-Director of CLIC, University of Maryland

"21st century negotiation involves complex combinations of social networks, culturally and demographically diverse organizations, global business relationships, as well as a heavy reliance on technologically-mediated communications.  The editors and authors of this innovative book bridge theory/research from the domains of organizational behavior/industrial psychology and negotiation to address the challenges to research and practice of negotiating effectively in the 21st century." - Jeanne Brett, DeWitt W. Buchanan, Jr. Distinguished Professor of Dispute Resolution and Organization, Northwestern University

In bringing together some of the world's best organizational scholars, this book studies the essence of effective management — effective negotiations. The authors provide nuanced insight into the factors that shape negotiations in the modern workplace where perceptions of fairness, identity and emotion are critical to relationship building and long-term value creation. - Sally Blount, Dean, Kellogg School of Management, Northwestern University

"Negotiation as a management skill is critical.  This book is a well-needed update of the literature, research, and practical implications for negotiators in organizataions.  The line-up of expert authors is commendable, providing much-needed insights based on negotiation research for employees and managers and future directions for researchers.  The inclusion of justice issues, emotion, and procedural strategies and responses is exactly what the field, and organizations, need at this point in time." - Karen Jehn, Melbourne Business School, Australia