The Quarrel Between Poetry and Philosophy
Perspectives Across the Humanities 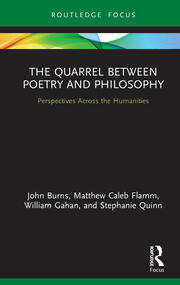 The Quarrel Between Poetry and Philosophy: Perspectives Across the Humanities

The Quarrel Between Poetry and Philosophy: Perspectives Across the Humanities is an interdisciplinary study of the abiding quarrel to which poet-philosopher Plato referred centuries ago in the Republic. The book presents eight chapters by four humanities scholars that historically contextualize and cross-interpret aspects of the quarrel in question. The authors share the view that although poets and philosophers continually quarrel, a harmonious union between the two groups is achievable in a manner promising application to a variety of contemporary cultural-political and aesthetic debates, all of which have implications for the current status of the humanities.

Chapter One: Origins of the Quarrel

Chapter Two: Vergil and Broch in Worlds Upside Down: Living the Quarrel

Chapter Six: Vergil, Broch and a "Place" for Art: Answering the Quarrel

John Burns is Visiting Associate Professor of Spanish Studies at Bard College. He has published the book Contemporary Hispanic Poets: Cultural Production in the Global, Digital Age and numerous book chapters, including "Teaching Infrarrealistas: Using Lesser Known Contemporary Poets in the Undergraduate Classroom" in Teaching Latin American Poetries and "From Manifesto to Manifestation: The Infrarrealista Movement as an Alternative Latin American Literary Community," in Alternative Communities in Hispanic Literature and Culture. He has also published articles and book reviews in publications such as Film International (web), 1616: Anuario de Literatura Comparada, and Feminist Collections: A Quarterly of Women’s Studies Resources. His publications also include translations—of the Chilean poet Raúl Hernández and Galician poet Manuel Antonio, as well as translations of the Beat poets into Spanish in collaboration with Rubén Medina—and his own creative work. He has previously taught at Bard High School Early College Queens, Rockford University in Illinois, and Kobe College in Japan, where he served as Visiting Researcher.

is Professor of Philosophy at Rockford University. A scholar of Classical American Philosophy, he has published journal and book-chapter essays on George Santayana, John Dewey, and Josiah Royce. He has co-edited and authored four book-anthologies, Under Any Sky: Contemporary Readings of George Santayana (with Krzysztof Piotr Skowronski), American and European Values: Contemporary Philosophical Perspectives (with John Lachs and Krzysztof Piotr Skowronski), The Continuing Relevance of John Dewey: Reflections on Aesthetics, Morality, Science, and Society. (With Larry A. Hickman, and Krzysztof Piotr Skowronski, and Jennifer A. Rea), and Santayana at 150: International Interpretations. (With Giuseppe Patella and Jennifer A. Rea).

, Chair of the English Department and Faculty Trustee at Rockford University, is a native of Madrid, Spain. He has published translations of Renaissance Spanish literature in Garcilaso’s Tunisian Poems: A Bilingual Edition, with Richard Helgerson for A Sonnet From Carthage. Gahan has presented on medieval and early modern literature, Golden Age plays, and Shakespearean drama. His interests in interdisciplinary approaches have resulted in various publications, such as "Shakespeare, Santayana, and Dramatizing Doubt in Hamlet" The Bulletin of the Santayana Society; articles and selections in Early Modern Broadside Ballads: From the Pepys Collection, ed. Patricia Fumerton; and essays on Spanish painting and Latin American and U.S. poets. At Rockford University, he won the Last Lecture Award in 2013 and the Excellence in Teaching and Campus Leadership Award in 2014.

is Associate Professor of Classical Studies at Rockford University. She has presented on Hermann Broch and Vergil at the Rocky Mountain MLA, at the Chicago Classical Club, and in January 2020, at the Society of Classical Studies panel on "Imperial Virgil." In October 2018, she spoke on "Circe at the Center of Virgil’s Aeneid" at the Illinois Classical Conference. Her 2000 book, Why Vergil? A Collection of Interpretations, continues to be used widely as a reference. Professor Quinn has served as Executive Vice President at Rockford University, as Provost at Millikin University, and in senior academic administrative positions at DePaul University and the National Endowment for the Humanities.