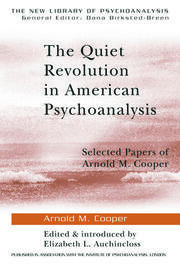 This book brings together for the first time in one volume selected papers by one of the leading contemporary intellectual figures in the field of psychoanalysis, Arnold M. Cooper M.D.

Cooper has addressed every aspect of American psychoanalytic life: theory, clinical work, education, research, the interface with neighboring disciplines, and the institutional life of the profession. In these papers, he both documents and critiques what he calls a 'Quiet Revolution' following the death of Freud, in the way psychoanalysis is conceived: as a science, as a theory of mental life, as a treatment, as a profession.

Throughout his professional life, the process of change has fascinated Cooper. His own contributions to psychoanalytic clinical theory have changed our understanding of work with patients to include a greater appreciation of narcissistic and pre-oedipal themes in development and of the human encounter embedded in the psychoanalytic situation. His progressive leadership in our educational and professional organizations has done much to promote change toward greater self-examination and tolerance of new ideas, and indeed, to create the conditions that make change possible.

Above all, Cooper's unique ability to observe and reflect upon the process of change, recorded here in papers selected from over 150 written in the years between 1947 and 2002, has helped make Cooper the guide to whom psychoanalysts repeatedly turn to understand not only where, but even what, psychoanalysis is.

Cooper, Foreword. Auchincloss, Introduction. The Impact on Clinical Work of the Analyst's Idealizations and Identifications (1998). Part I: The Quiet Revolution in Psychoanalysis. Psychoanalytic Inquiry and New Knowledge (1980 [1983]). Psychoanalysis at One Hundred: Beginnings of Maturity (1982 [1984]). Psychoanalysis Today: New Wine in Old Bottles (1986). Comments on Freud's 'Analysis Terminable and Interminable' (1987). Part II: The Analyst at Work. Some Limitations on Therapeutic Effectiveness: The 'Burnout Syndrome' in Psychoanalysis (1982 [1986]). Difficulties in Beginning the Candidate's First Analytic Case (1985). Changes in Psychoanalytic Ideas: Transference Interpretation (1985 [1987]). Some Thoughts on How Therapy Does and Doesn't Work (1989 [1991]). Formulations to the Patient: Explicit and Implicit (1995 [1994]). Part III: Vicissitudes of Narcissism. The Narcissistic-Masochistic Character (1973 [1988]). The Unusually Painful Analysis: A Group of Narcissistic-Masochistic Characters (1981 [1986]). What Men Fear: The Facade of Castration Anxiety (1985 [1986]). The Unconscious Core of Perversion (1989 [1991]). Paranoia: A Part of Most Analyses (1991 [1993]). Part IV: Challenging the Boundaries of Psychoanalysis. Will Neurobiology Influence Psychoanalysis? (1984 [1985]). Infant Research and Adult Psychoanalysis (1988 [1989]). Psychoanalysis and Psychotherapy: The Same or Different? (1990). Discussion on Empirical Research (1993).

Elizabeth L. Auchincloss is Vice-Chair for Graduate Medical Education and Professor of Clinical Psychiatry at Weill-Cornell Medical Center and and Associate Director and Training and Supervising Psychoanalyst at the Columbia University Center for Psychoanalytic Training and Research.

'The clinical examples are illustrative, clear, occasionally self-critical, and modest. It is unusual for an analyst to write about his mistakes, where he has erred, and where he has done poorly. The last section of the book deals with psychoanalysis as a profession. As we have come to expect from Cooper, the emphasis here is not an analytic rules or standard technique but on the analyst’s character, particularly the capacity to resonate and be empathic with the analysands.' - Harry Trosman, Journal of the American Psychoanalytic Association 2006 Vol 54 No. 2, p659

'In this book we have an excellent example of how psychoanalysis has grown primarily as a result of clinical work, though fertilized by neighboring disciplines that augment its base of knowledge.  In addition to the clinical context, Cooper has benefited from literature, philosophy, infant research, and neurobiology. However, the major attraction of this work is its emphasis on the analystic situation as an empirical base for expanding the systematic body of psychoanalytic knowledge. Finally let me say that  in so far as the New Library of Psychoanalysis was seeking a spokesman for the contemporary American position, its editors chose well in publishing these papers of Arnold Cooper.' - Harry Trosman, Journal of the American Psychoanalytic Association 2006 Vol 54 No. 2, p600

'It follows from Cooper's stress on plurality, experiment, empirical research, the value of a psychoanalytic community, and pragmatic openness that he has an important place in contemporary psychoanalysis. To use his own language, he is a "lumper" rather than a "splitter", a force for mutual investigative collaboration, rather than a contestant against rival schools.' - Jay Martin, American Imago 2006 Vol 63 No. 1, p130

'Analysts with greatly differing convictions can learn much from Cooper's rigorous investigations of the narcissistic-masochistic character and its derivatives - in their patients, and perhaps even in themselves.' - Jay Martin, American Imago 2006 Vol 63 No. 1, p133

'With auto biographical candor and a probing attitude that permeates every page, Cooper reflects on the formative experiences and raises questions as  "... part of an ongoing personal struggle to reassure myself that my thinking psychoanalytically wasn't totally eccentric. I was never certain that I did deep analysis as the socalled orthodox did... Until quite recently I wasn’t sure that they didn't know something vital that I didn't." ...  He invites us to join his personal evolution - his silent revolution -  to think about where we have been as a profession and where we may be headed. ... The Quiet Revolution in American Psychoanalysis is both reassuring and disquieting, ultimately deidealizing complacency and stagnation while encouraging a questioning attitude about what is considered psychoanalytic.' - Julie Jaffee Nagel, The Psychoanalytic Quarterly Vol LXXV 2006 No 4