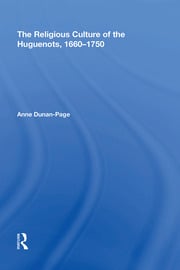 Recent years have witnessed a revival of interest in the history of the Huguenots, and new research has increased our understanding of their role in shaping the early-modern world. Yet while much has been written about the Huguenots during the sixteenth-century wars of religion, much less is known about their history in the following centuries. The ten essays in this collection provide the first broad overview of Huguenot religious culture from the Restoration of Charles II to the outbreak of the French Revolution. Dealing primarily with the experiences of Huguenots in England and Ireland, the volume explores issues of conformity and nonconformity, the perceptions of 'refuge', and Huguenot attitudes towards education, social reform and religious tolerance. Taken together they offer the most comprehensive and up-to-date survey of Huguenot religious identity in the seventeenth and eighteenth centuries.

Contents: Introduction, Anne Dunan-Page. Part 1 The Issue of Conformity: Conformity, non-conformity and Huguenot settlement in England in the later 17th century, Robin Gwynn; Differing perceptions of the refuge? Huguenots in Ireland and Great Britain and their attitudes towards the governments' religious policy (1660-1710), Susanne Lachenicht; The Oxford Dictionary of National Biography, the du Moulin connection and the location of the Church of England in the later 17th century, Vivienne Larminie. Part 2 Church Organisation and Social Structure: Dominus providebit: Huguenot commitment to poor relief in late-17th and 18th-century England, Randolph Vigne; Killing in good conscience: Marshal Schomberg and the Huguenot soldiers of the Glorious Revolution of 1688, Matthew Glozier; The Huguenot soul: The Calvinism of Reverend Louis Rou, Paula Carlo. Part 3 The Circulation of Ideas: The influence of the Huguenots on educated Ireland: Huguenot books in Irish church libraries of the 18th century, Jane McKee; The role of Huguenot tutors in John Locke's programme of social reform, S.J. Savonius; The Rainbow Coffee House and the exchange of ideas in 18th-century London, Simon Harvey and Elizabeth Grist; Huguenot traces and reminiscences in John Toland's conception of tolerance, Myriam Yardeni. Bibliography; Index.