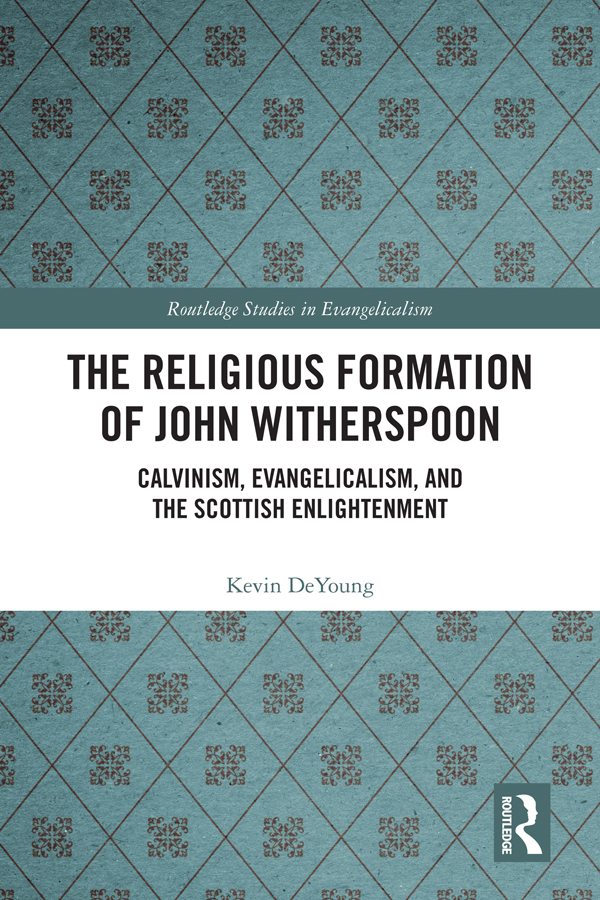 The Religious Formation of John Witherspoon

This book explores in unprecedented detail the theological thinking of John Witherspoon during his often overlooked ministerial career in Scotland. In contrast to the arguments made by other historians, it shows that there was considerable continuity of thought between Witherspoon’s Scottish ministry and the second half of his career as one of America’s Founding Fathers.

The book argues that Witherspoon cannot be properly understood until he is seen as not only engaged with the Enlightenment, but also firmly grounded in the Calvinist tradition of High to Late Orthodoxy, embedded in the transatlantic Evangelical Awakening of the eighteenth century, and frustrated by the state of religion in the Scottish Kirk. Alongside the titles of pastor, president, educator, philosopher, should be a new category: John Witherspoon as Reformed apologist.

This is a fresh re-examination of the intellectual formation of one of Scotland’s most important churchman from the eighteenth century and one of America’s most influential early figures. The volume will be of keen interest to academics working in Religious History, American Religion, Reformed Theology and Calvinism, as well as Scottish and American history more generally.

Other notes on sources

‘A Little Tinctured with Fanaticism’Witherspoon and the Rise of Evangelicalism

‘How Is the Gold Become Dim!’Witherspoon’s Ministry in the Church of Scotland

‘An Age in Which Infidelity Greatly Prevails’Witherspoon and the Enlightenment

‘The Calvinist Doctrines in Popular Form’Witherspoon’s Work in America

Satirical Poem to the Presbytery of Paisley (c.1764)

Kevin DeYoung is the Senior Pastor at Christ Covenant Church in Charlotte, North Carolina (USA) and an Assistant Professor of Systematic Theology at Reformed Theological Seminary. He blogs for The Gospel Coalition and has published more than a dozen books and a number of scholarly articles on theology, history, and Christianity.

The study of evangelicalism is a well-developed discipline with a strong international readership. A major movement within global Christianity, it continues to attract considerable scholarly and ‘popular’ interest on both sides of the Atlantic and further afield. The Routledge Studies in Evangelicalism series publishes monographs and collaborative volumes of significant original research in any aspect of evangelical history or historical theology from the eighteenth century to the present, and is global in its scope. This series will appeal both to the flourishing community of scholars of religious history and to informed practitioners within the evangelical constituency.