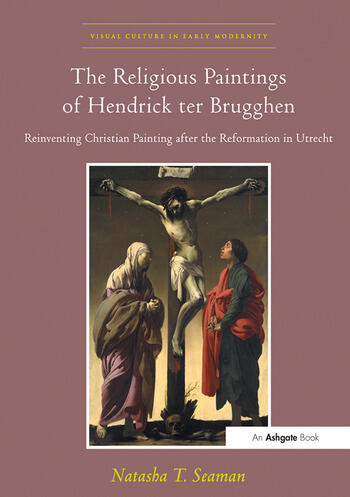 The Religious Paintings of Hendrick ter Brugghen: Reinventing Christian Painting after the Reformation in Utrecht

The first in-depth study of the Utrecht artist to address questions beyond connoisseurship and attribution, this book makes a significant contribution to Ter Brugghen and Northern Caravaggist studies. Focusing on the Dutch master's simultaneous use of Northern archaisms with Caravaggio's motifs and style, Natasha Seaman nuances our understanding of Ter Brugghen's appropriations from the Italian painter. Her analysis centers on four paintings, all depicting New Testament subjects. They include Ter Brugghen's largest and first known signed work (Crowning with Thorns), his most archaizing (the Crucifixion), and the two paintings most directly related to the works of Caravaggio (the Doubting Thomas and the Calling of Matthew). By examining the ways in which Ter Brugghen's paintings deliberately diverge from Caravaggio's, Seaman sheds new light on the Utrecht artist and his work. For example, she demonstrates that where Caravaggio's paintings are boldly illusionistic and mimetic, thus de-emphasizing their materiality, Ter Brugghen's works examined here create the opposite effect, connecting their content to their made form. This study not only illuminates the complex meanings of the paintings addressed here, but also offers insights into the image debates and the status of devotional art in Italy and Utrecht in the seventeenth century by examining one artist's response to them.

Contents: Introduction: art after iconoclasm: Hendrick ter Brugghen and the material image; A Dutch painter in Italy: the attraction and critique of Caravaggio; Archaism and the material image in Rome; An Italianate artist in Utrecht: art and archaism within and without the hidden church; Materiality and the presence of the past in Hendrick ter Brugghen's Crucifixion; Icon, narrative, and iconoclasm in the Crowning with Thorns; The theology of conversion in the Doubting Thomas and Calling of Matthew; Conclusion: moving past materiality: The Denial of Peter; Bibliography; Index.

'In essence, Natasha Seaman's valuable book is the first comprehensive study of the fascinating religious art of Hendrick ter Brugghen that is not principally concerned with questions of connoisseurship. Seaman approaches ter Brugghen's paintings in terms of his dynamic engagement with the art of Caravaggio and that of earlier Northern European masters. In the process, she provides a much-needed corrective to the traditional view that the Dutch master was simply "borrowing" motifs and imagery that interested him.' Wayne Franits, Syracuse University, USA

'... this study is a groundbreaking analysis of this artist... Highly recommended.' Choice

'We know very little about Hendrik ter Brugghen. Although his oeuvre has been well described by Benedict Nicolson and, recently, Leonard J. Slatkes and Wayne Franits, the question of how he arrived at his idiosyncratic style and iconography has hardly been addressed. Several seasoned art historians have advanced theories about his enigmatic blend of Caravaggism and archaism, but Seaman is the first to devote a complete book to the cultural and artistic context of his work. She focuses on four major religious paintings made between 1620 and 1625, when the archaic tendencies in Ter Brugghen’s art were most powerful and his engagement with Caravaggio’s art was most explicit... What is most important, and the book makes this abundantly clear, is that Ter Brugghen was very ambitious in his attempts to renew religious painting.' Burlington Magazine

'Seaman discusses each [of the paintings] with exceptional clarity, historical depth and acute awareness of the theological cross-currents that pervaded both post-reformation Utrecht, and the artist himself, described by one contemporary as ’a man of profound but melancholy thoughts’.' Art & Christianity

'... The Religious Paintings of Hendrick ter Brugghen is a most welcome contribution to the field. A glowingly intelligent and original piece of scholarship, it is the first book to treat the two defining elements of Ter Brugghen's art, Caravaggism and archaism with the seriousness that they require, and one that goes a long way to making sense of them.' Historians of Netherlandish Art

'Natasha Seaman does a great service in bringing to the fore the role of overt archaism in early seventeenth-century Dutch religious painting for Catholic audiences.' Renaissance Quarterly

'Seaman's charting of Ter Brugghen's archaisms is excellent, and the numerous illustrations in this book clarify the inherently visual nature of her argument.' Sixteenth-Century Studies Journal