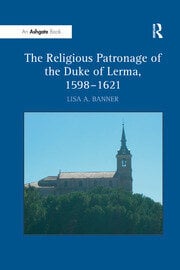 Introducing fresh archival evidence, author Lisa Banner here demonstrates how Francisco Gómez de Sandoval y Rojas, first Duke of Lerma, served as a vital link in Habsburg architectural patronage. She traces Lerma's trajectory as, beginning with the ancient royal city of Valladolid, he embarked on a career of renovating or building religious foundations in various towns and cities around seventeenth-century Spain. The unintended consequence of his architectural patronage and involvement was to proliferate the distinctive royal architectural style developed under Philip II, which connected the foundations of Lerma indelibly with the traditions of noble patronage in Habsburg Spain.

Lisa A. Banner is currently at work on a collection catalogue of Spanish drawings at the Princeton University Art Museum. She has published previously on seventeenth-century Spanish collecting, patronage and Habsburg architecture.

'Lisa Banner has rounded out our understanding of Philip III of Spain's favorite, the Duke of Lerma, by delving into yet another dimension of this great collector's motives and interests. Truly an important contribution that sheds new light on a significant yet understudied period in the art of the Spanish Golden Age.' Sarah Schroth, Duke University, USA

'Banner's exhaustive and thorough research adds an entirely new dimension to current understanding of the artistic and architectural interests of the duke of Lerma, one of the most influential (albeit controversial) political figures in early seventeenth-century Spain. There is much to be learned from her important insights into the place of religion in Lerma’s career. "Must" reading for art historians and historians alike.' Richard L. Kagan, Johns Hopkins University, USA

’Banner's sound research, clear presentation of the material, and new conclusions make it a valuable contribution to a period that is finally receiving the scholarly attention it so richly deserves.’ Renaissance Quarterly

’This is an admirable and important book. ... Banner’s study will be fundamental to all future assessments of Lerma and will help to reassert the importance of religion in the life of early-modern Europe; she is to be congratulated on her achievement.’ Catholic Historical Review

’This fascinating and highly readable book, with its abundant notes, makes an important contribution to our understanding of the Duke of Lerma’s religious patronage and court culture in seventeenth-century Spain.’ The Burlington Magazine