The Rise and Fall of Modern Empires, Volume I
Social Organization 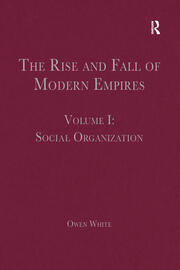 The Rise and Fall of Modern Empires, Volume I: Social Organization

This collection brings together twenty-one articles that explore the diverse impact of modern empires on societies around the world since 1800. Colonial expansion changed the lives of colonised peoples in multiple ways relating to work, the environment, law, health and religion. Yet empire-builders were never working with a blank slate: colonial rule involved not just coercion but also forms of cooperation with elements of local society, while the schemes of the colonisers often led to unexpected outcomes. Covering not only western European nations but also the Ottomans, Russians and Japanese, whose empires are less frequently addressed in collections, this volume provides insight into a crucial aspect of modern world history.

Owen White is Associate Professor in the Department of History at the University of Delaware, USA.