The Role, Position and Agency of Cusp States in International Relations 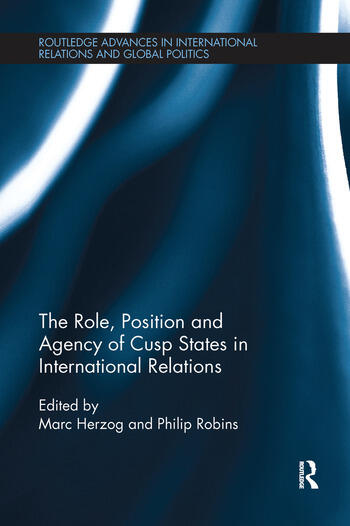 The Role, Position and Agency of Cusp States in International Relations

This work seeks to develop a new concept with which to analyse the actions and activities of states that tend to be relatively ignored by the discipline of International Relations (IR).

As a discipline, IR has a tendency to lean towards the analytically safe. Given the current and recent dynamism of the international system that is both surprising and undesirable. Arranged around the concept of the idea of the Cusp State (and cuspness more generally), the book consists of empirical analysis of eight different countries Brazil, Iran, Israel, Japan, Mexico, Taiwan, Turkey and Ukraine, defined as ‘states that lie uneasily on the political and/or normative edge of what is widely believed to be an established region’. By focusing on the importance of comparing groups of states, like states with high degrees of ‘cuspness’, this book argues that it is possible to categorise the world in a fresher and more original way, and one which covers more of the globe than either a systemic or regionalist approach would do.

This work will be of great interest to students and scholars of Geopolitics, International Security and Regionalism.

Introduction, ‘Cusp States’ in International Relations: In Praise of Anomalies Against the ‘Milieu’ , Philip Robins 1. Geographical Representation of Turkey’s Cuspness: Discourse and Practice, Meliha Benli Altunışık 2. From Cusp to Hub? How Turkey tried to instrumentalize its ‘cuspness’ as an aspiring multi-regional middle power, Marc Herzog 3. Ukraine as a Cusp State: The Politics of Reform in the Borderland between EU and Russia, Oktay Tanrısever 4. Iran as a Cusp State: The Politics of Dislocation, Derya Akder Göçer 5. Israel’s foreign policy towards the PLO and its location on the cusp: From coherence to incoherence? Amnon Aran 6. Straddling the Region and the World: Brazil’s dual foreign policy comes of Age, Andrés Malamud; Júlio César Cossio Rodriguez  7. Between Two Regions: The scope and limits of Mexico’s cuspness, Mónica Serrano 8. Regional Governance and Japan as a Cusp State: Whither spatial boundaries in East Asia? Glenn Hook 9. Taiwan as a Cusp Case: Contrasting Its People’s Democratic Beliefs with Those of the Chinese and Americans, Steve Chan

Marc Herzog is Assistant Director of the British Institute at Ankara, Turkey.

is Faculty Fellow and University Reader in the Politics of the Middle East at the University of Oxford, UK.