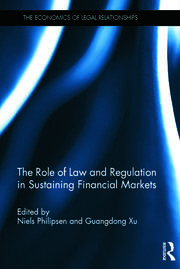 This book explores the role of law and regulation in sustaining financial markets in both developed and developing countries, particularly the European Union, United States and China. The central argument of this book is that law matters for the operation of financial markets, which, in turn, significantly influences the performance of firms, industries, and economies.

is divided into four parts. Part one addresses the connection between law, financial development, and economic growth. Part two deals with the role of financial regulation, which can be used to correct market failures, such as negative externalities, information asymmetries, and monopolies. Part three focuses on the design, functioning, and performance of different financial instruments. Part four examines the topic of Corporate Social Responsibility. This book contributes to the ‘law and finance’ literature by studying certain conventional issues, such as the relationship between finance and economic growth, and the effects of regulatory quality on financial development, from new perspectives and/or with new evidence, data, and cases. It also explores novel topics, such as project finance contracts, insurance and climate change, the shadow banking system, that have been overlooked in current literature.

This book is meaningful not only for the EU and the US, which have suffered considerably from the financial crisis of 2008, but also for China, which is struggling to build a sound institutional infrastructure to govern its increasingly complicated financial system. By comparing the regulatory philosophies and practices of the EU, the US and China, this book will help the reader to understand the diverse nature of the global ‘law and finance’ nexus and avoid succumbing to the myth of "one size fits all".

is Associate Professor of Law and Economics, and Vice-Director of the Maastricht European Transnational Legal Research (METRO) Institute, in the Faculty of Law, Maastricht University, the Netherlands.

is Associate Professor of Law and Economics at the China University of Political Science and Law, Beijing, China.