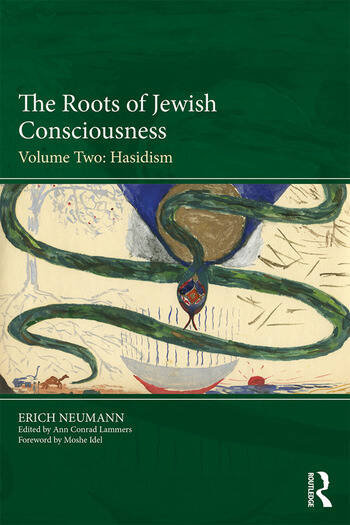 The Roots of Jewish Consciousness, Volume Two: Hasidism is the second volume, fullyannotated, of a major, previously unpublished, two-part work by Erich Neumann (1905–1960). It was written between 1940 and 1945, after Neumann, then a young philosopher and physician and freshly trained as a disciple of Jung, fled Berlin to settle in Tel Aviv. He finished this work at the end of World War II. Although he never published it, he kept it the rest of his life.

Volume Two, Hasidism, is devoted to the psychological and spiritual wisdom embodied in Jewish spiritual tradition. Relying on Jung’s concepts and Buber’s Hasidic interpretations, Neumann seeks alternatives to the legalism and anti-feminine bias that he says have dominated collective Judaism since the Second Temple. He argues that modern Jews can develop psychological wholeness through an appropriation of Hasidic legends, Talmudic texts, and Kabbalistic mysteries, including especially the Zohar. Exclusively, this volume includes a foreword by Moshe Idel. An appendix, Neumann’s four-lecture series from the 1940s, gives a glimpse of his intended, unpublished Part Three.

These volumes anticipate Neumann’s later works, including Depth Psychology and a New Ethic, The Origins and History of Consciousness, and The Great Mother. In Volume Two, Hasidism, his concept of the ego–Self axis is developed in clearly psychological terms. Four previously unpublished essays, appended to Volume Two, illustrate Neumann’s developmental psychology, including his theme of primary and secondary personalization. This unique work will appeal to Jungian analysts and psychotherapists in training and in practice, historians of psychology, Jewish scholars, biblical historians, teachers of comparative religion, as well as academics and students.

List of Ilustrations;  Foreword: On Erich Neumann and Hasidism, by Moshe Idel;  Acknowledgments;  Abbreviations;  Introduction to Volume Two, by Ann Conrad Lammers;  Hasidism: Its Psychological Meaning for Judaism;  Chapter 1: The Structure of the World as Inwardness;  Chapter 2: The Transformation of Souls;  Chapter Three: Life in this World;  Chapter Four: The Human Being and the New Image of God;  Chapter Five: Hasidism and the Birth of the Modern Jew;  Appendix A: Passages from the Zohar in English Translation;  Appendix B: The Importance of Consciousness in the Experience of Depth Psychology (Four-lecture series, 1942-43);  Editorial Note;  Bibliography; Index; Scriptural Index.

"Erich Neumann is cited more than any single psychoanalytic writer in the ever-growing exploration of Kabbalah and psychology. So it is gratifying that his work on Kabbalah and Hasidism can now enrich this vibrant discussion. Neumann’s especial contribution is the development of the theme of dual transformation, of the world and of the soul, for Jewish mystical psychology, and highlighting the Hasidic move away from moralism towards radical embracing of the full range of psychic manifestation. This exquisitely crafted project will be of profound interest to all who are concerned with the religious life as such." - Professor Jonathan Garb, Gershom Scholem Chair in Kabbalah; Chair, Department of Jewish Thought, Hebrew University of Jerusalem, Israel