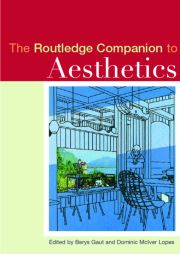 ‘This is an immensely useful book that belongs in every college library and on the bookshelves of all serious students of aesthetics.’ Journal of Aesthetics and Art Criticism

‘The succinctness and clarity of the essays will make this a source that individuals not familiar with aesthetics will find extremely helpful.’ The Philosophical Quarterly

‘An outstanding resource in aesthetics…this text will not only serve as a handy reference source for students and faculty alike, but it could also be used as a text for a course in the philosophy of art.’ Sondra Bacharach, Australasian Journal of Philosophy

‘Attests to the richness of modern aesthetics…the essays in central topics – many of which are written by well-known figures – succeed in being informative, balanced and intelligent without being too difficult.’ British Journal of Aesthetics

'This handsome reference volume. . .belongs in every library.' Choice

'The Routledge Companions to Philosophy have proved to be a useful series of high quality surveys of major philosophical topics and this volume is worthy enough to sit with the others on a reference library shelf.' - Philosophy and Religion

‘The sheer eclecticism of this work – the variety of content, method, outlook and sensibility – shows the vigour and vitality that aesthetics as a branch of modern philosophy has come to assume in the last two or three decades. Its compilation is a real achievement, and it will appeal to a very wise range of readers. Some of these essays are, and will remain, classics of their kind.’ Richard Wollheim