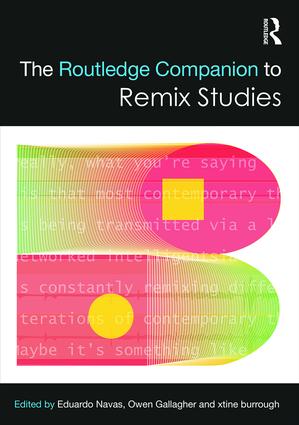 The Routledge Companion to Remix Studies

The Routledge Companion to Remix Studies comprises contemporary texts by key authors and artists who are active in the emerging field of remix studies. As an organic international movement, remix culture originated in the popular music culture of the 1970s, and has since grown into a rich cultural activity encompassing numerous forms of media.

The act of recombining pre-existing material brings up pressing questions of authenticity, reception, authorship, copyright, and the techno-politics of media activism. This book approaches remix studies from various angles, including sections on history, aesthetics, ethics, politics, and practice, and presents theoretical chapters alongside case studies of remix projects. The Routledge Companion to Remix Studies is a valuable resource for both researchers and remix practitioners, as well as a teaching tool for instructors using remix practices in the classroom.

8. Remix Strategies in Social Media Lev Manovich 9. Remixing Movies and Trailers Before and After the Digital Age Nicola Maria Dusi 10. Remixing the Plague of Images: Video Art from Latin America in a Transnational Context Erandy Vergara 11. Race & Remix: The Aesthetics of Race in the Visual & Performing Arts Tashima Thomas 12. Digital Poetics and Remix Culture: From the Artisanal Image to the Immaterial Image Monica Tavares 13. The End of an Aura: Nostalgia, Memory, and the Haunting of Hip-hop Roy Christopher 14. Appropriation is Activism Byron Russell

15. The Emerging Ethics of Networked Culture Aram Sinnreich 16. The Panopticon of Ethical Video Remix Practice Mette Birk 17. Cutting Scholarship Together/Apart: Rethinking the Political-Economy of Scholarly Book Publishing Janneke Adema 18. Copyright and Fair Use in Remix: From Alarmism to Action Patricia Aufderheide 19. I Thought I Made A Vid, But Then You Told Me That I Didn’t: Aesthetics and Boundary Work in the Fan Vidding Community Katharina Freund 20. Peeling The Layers of the Onion: Authorship in Mashup and Remix Cultures John Logie 21. remixthecontext (a theoretical fiction) Mark Amerika

Eduardo Navas is the author of Remix Theory: The Aesthetics of Sampling (Springer, 2012). He researches and teaches principles of cultural analytics and digital humanities in the School of Visual Arts at The Pennsylvania State University, PA. Navas is a 2010–12 Post-Doctoral Fellow in the Department of Information Science and Media Studies at the University of Bergen, Norway, and received his PhD from the Program of Art and Media History, Theory, and Criticism at the University of California in San Diego.Owen Gallagher received his PhD in Visual Culture from the National College of Art and Design (NCAD) in Dublin. He is the founder of TotalRecut.com, an online community archive of remix videos, and a cofounder of the Remix Theory & Praxis seminar group. He is the author of a number of research papers and book chapters on remix culture, intellectual property, and visual semiotics. Owen is a lecturer of Web Media at Bahrain Polytechnic.xtine burrough is a media artist and educator. She has authored or edited several books including Foundations of Digital Art and Design (New Riders, 2014) and Net Works: Case Studies in Web Art and Design (Routledge, 2012). She believes in the transformative power of participatory, digital art. xtine bridges the gaps between histories, theories, and production in new media education.