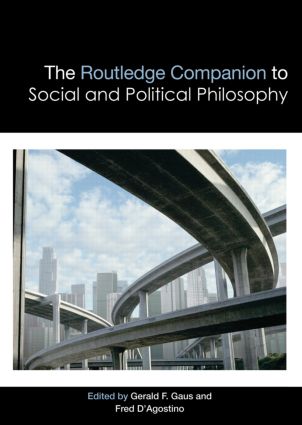 The Routledge Companion to Social and Political Philosophy

The Routledge Companion to Social and Political Philosophy is a comprehensive, definitive reference work, providing an up-to-date survey of the field, charting its history and key figures and movements, and addressing enduring questions as well as contemporary research. Features unique to the Companion are:

Comprised of sixty-nine newly commissioned essays by leading scholars from throughout the world, The Routledge Companion to Social and Political Philosophy is the most comprehensive and authoritative resource in social and political philosophy for students and scholars.

"Like all the books in the Routledge companion series, this one is a marvelous combination of guidebook and treasure-trove. The contributors address the most important thinkers in the field, the most important concepts, the most important theories and methodologies, and they bring their thinking to bear on important issues like health care, sexuality, democracy, terrorism and security. The articles are provocative as well as informative, and the choice of contributors reflects as fine a combination of diversity and expertise as you are likely to find in any volume of this kind." - Jeremy Waldron, NYU Law School and Oxford University

"This is a mountain of a book, the most accessible trove of authoritative political philosophy between two covers! My own copy is destined to become well-worn, and I will direct my students to it as their primary resource once they buck up the courage to go beyond Wikipedia." - Loren Lomasky, University of Virginia

"It is extremely impressive that Gaus and D'Agostino were able to commission these essays from so many of the leading scholars on such a vast and diverse slate of subjects. Given the breadth of historical and contemporary topics covered, this collection is an invaluable addition to the literature in social and political philosophy." - Christopher Heath Wellman, Washington University in St. Louis

"In assembling this ambitious book, editors Gaus and D’Agostino aspired to guide their readers through the whole of political philosophy and its history. They have succeeded admirably. The book’s unrivalled breadth of coverage is complemented by the depth of the essays it includes. The sixty-nine entries have all been written by recognized experts, who were encouraged to produce entries of sufficient length and sophistication that they will interest scholars while remaining accessible to undergraduates, graduate students and philosophers who work in other areas. This marvelous and incomparable volume will prove an indispensable companion to anyone with an interest in social and political philosophy." - Paul Weithman, University of Notre Dame

Gerald Gaus is James E. Rogers Professor of Philosophy at the University of Arizona.

Fred D'Agostino is Professor of the Humanities and Dean in the Faculty of the Arts at the University of Queensland.