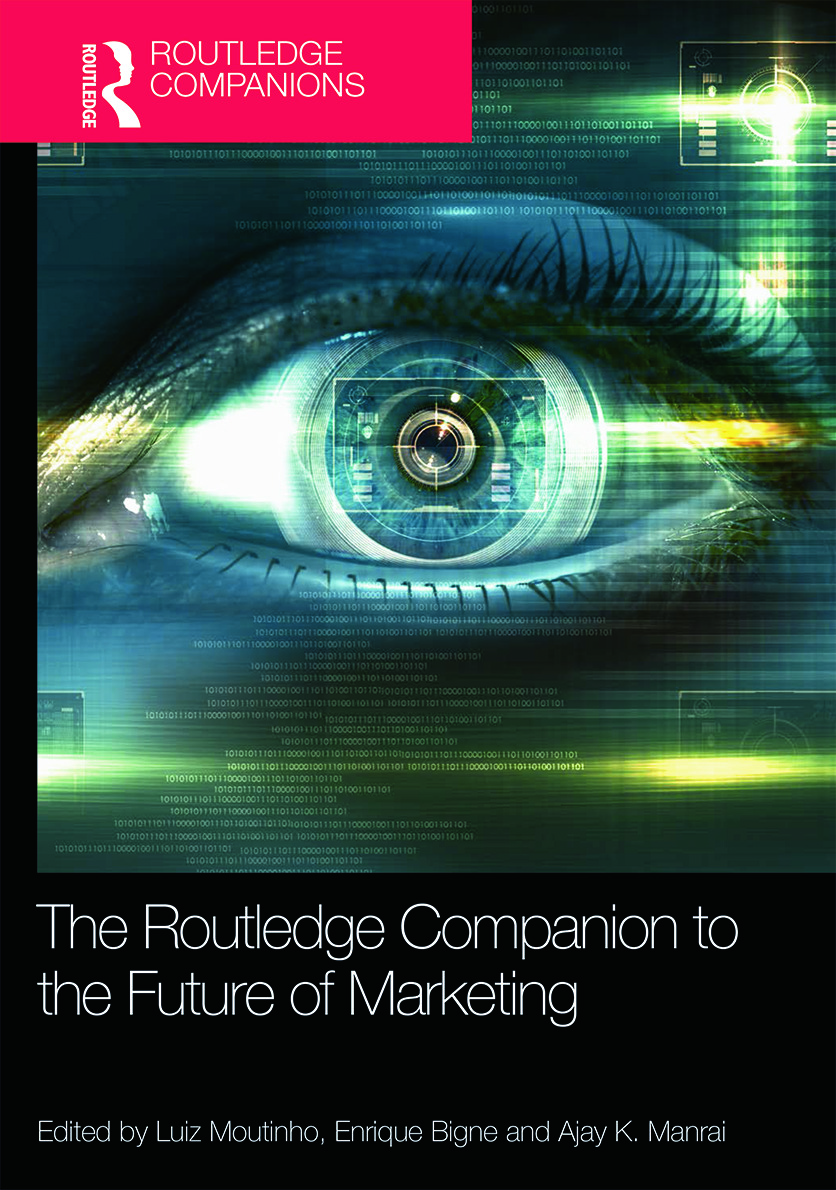 Marketing has changed substantially in the last few years. With more and more research conducted in marketing and consumer behaviour fields, and technological advances and applications occurring on a regular basis, the future of marketing opens up a world of exciting opportunities.

Going beyond a state-of-the-art view of the discipline, this innovative volume focuses on the advances being made in many different areas such as; critical thinking, new paradigms, novel conceptualisations, as well as key technological innovations with a direct impact on the theory and practice of marketing. Each chapter presents an expert overview, and an analytical and engaging discussion of the topic, as well as introducing a specific research agenda paving the way for the future.

The Routledge Companion to the Future of Marketing provides the reader with a comprehensive set of visionary insights into the future of marketing. This prestigious collection aims to challenge the mindset of marketing scholars, transforming current thinking into new perspectives and advances in marketing knowledge.

"The Future of Marketing" presents 22 different chapters written by some of the top scholars in the field of Marketing. These 22 chapters are organized into four topical areas: (1) New paradigms and philosophical insights (Chapters 1-5), (2) Contributions from other scientific fields (Chapters 6-9), (3) Reconnecting with consumers and markets (Chapters 10-17), and (4) New methodological insights in scholarly research in the field (Chapters 18-22). Thus, there are a number of diverse areas treated here ranging from futuristic managerial philosophies to state of the art qualitative and quantitative methodologies applicable to the various types of Marketing problems to be faced in the future.

There are a number of implicit guidelines (and future research areas and needs) that can be gleaned for (quantitative) modelers in terms of the issues and considerations that their constructed models should explicitly accommodate in future empirical endeavors:

When modeling consumer perceptions, preferences, utility structures, choices, etc., it is important to avoid potential masking issues that aggregate models are subject to in many cases. In the simple case, consider a regression scenario where there are two equal sized segments whose utility functions (as a function of price) are opposite reflections of each other. Aggregating the sample in one large analysis yields a non-significant price elasticity coefficient, whereas estimating separate utility functions by segment displays the true structure in the data. While latent structure and hierarchical Bayesian methods have been developed for disaggregate analyses, a number of methodological issues exist with such existent approaches that provide fertile ground for future research.

Many quantitative models are estimated at a brand level and reflect only the efforts of that sole brand. For example, in many customer satisfaction studies, attention is often paid to the consumers of a particular client brand or service in an effort to portray their performance and derive the important drivers of satisfaction. Financial optimization models are then often constructed to examine where a company should invest its resources to best improve sales, retention, word of mouth, loyalty, etc. These studies need to occur in a fully competitive setting where one derives a full picture of the competitive market place. Managers need to know the relative importance of the drivers of satisfaction for their brand/service as well as for their competitors. In addition, knowledge of the relative performance of their brand relative to competitors is necessary information for strategy formation. Ideally, one would hope to see modeling efforts which also examine cross effects in terms of how Brand A’s policy affects other brands. Over time, competitive dynamics are also important as discussed next.

As seen in the various chapters, this can assume many different manifestations. Related to the previous category above related to competition, it is often necessary to examine competitive dynamics as opposed to comparative statics where the modeler of the future examines simultaneous and/or sequential optimization by each of the competitors in a market place in a game theoretic context. In such a manner, it will not be the case that all competitors end up enacting the same exact identical strategies. Alternatively, the models of the future should be adaptive and have the ability to "learn" from past data, as well as benefit from informed managerial expert input and constraints. Parameter values that change/adapt during the duration of the data are also a desirable feature.

Traditional linear response functions do not typically yield realistic normative managerial guidelines or optimized solutions. End point solutions that suggest "all or none" types of resource allocations are useless in most realistic Marketing applications. A large amount of work is required in this area as Marketing often lacks the strong theory necessary to provide such insight regarding the models that are constructed. In addition, multiple objective functions need to be accommodated with the use of multicriterion optimization methods

Often times, there are hidden effects embedded in the various independent variables the Marketer believes are exogenous and truly independent. These may be due to effect of lagged variables, managerial decision making practice, etc. To ignore such effects, threatens the integrity of the models Marketers construct. For example, in traditional regression models, such endogeneity often produces a correlation between the independent variable in question and the error term, often resulting in biased estimates when employing ordinary least-squares estimation.

Ideally, the models we construct should be more than just data analytic structures which approximate the relationships found in the data. Where possible, models should be constructed on the basis of available sound Marketing theory describing the process being modeled. One of the advantages of structural equation models is that one can utilize such a methodology to test and implement some a priori theory describing the relationship or causal nature of various inter-related constructs. This feature has been lacking in the general modeling efforts to date. A major reason for this is due to the lack of adequate theory development for most of the processes encountered in Marketing. For example, we have no solid Marketing theory regarding the structure of marketing mix response models. Thus progress must be advanced in such areas so that the models we construct are more robust and explainable.

Every discipline needs to be reexamined in its fundamentals, given the huge impact of 21st century globalization and technology on our global market, economy and society. Those of us in marketing are in the midst of a changing marketing paradigm, moving us from a concern with growth, to a concern with conservation and social justice. I hope that all marketers taste this rich souffle of new ideas and add their own contributions.

This volume provides a futurist perspective to emerging topics in marketing, written by leading marketing scholars, including views on biomarketing, social media and digital connectivity, agent-based modeling and other new methodologies – even new ways of looking at marketing itself.

This books is a unique collection of the opinions on the future of marketing from some of the very best marketing researchers in the world!

Luiz Moutinho is Foundation Chair of Marketing at the University of Glasgow Business School, UK

Enrique Bigné is Professor of Marketing at the University of Valencia, Spain

Ajay K. Manrai is Professor of Marketing at the Alfred Lerner School of Business, University of Delaware, USA

Routledge Companions in Business, Management and Accounting are prestige reference works which provide an overview of a whole subject area or sub-discipline. These books survey the state of the discipline including emerging and cutting edge areas. Providing a comprehensive, up to date, definitive work of reference, Routledge Companions can be cited as an authoritative source on the subject.

Edited by an array of highly regarded scholars, these volumes also benefit from teams of contributors which reflect an international range of perspectives. Individually, Routledge Companions in Business, Management and Accounting provide an impactful one-stop-shop resource for each theme covered. Collectively, they represent a comprehensive learning and research resource for researchers, postgraduate students and reflective practitioners.