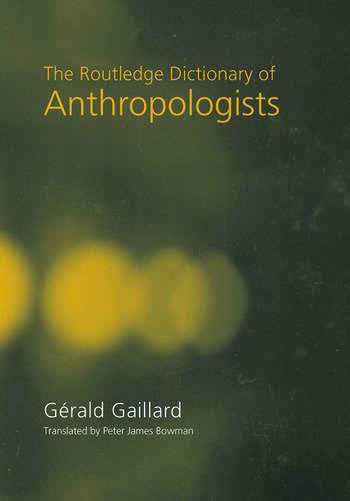 This detailed and comprehensive guide provides biographical information on the most influential and significant figures in world anthropology, from the birth of the discipline in the nineteenth century to the present day. Each of the fifteen chapters focuses on a national tradition or school of thought, outlining its central features and placing the anthropologists within their intellectual contexts. Fully indexed and cross-referenced, The Routledge Dictionary of Anthropologists will prove indispensable for students of anthropology.

Chapter 1 The Nineteenth Century and the Evolutionists, Chapter 2 Field Workers and Early Informants, Chapter 3 The Turn of the Century: The Diffusionist Schools, Chapter 4 American Anthropology, Chapter 5 The French Tradition and the Institut d'ethnologie, Chapter 6 The American Tradition from the End of the First World War to the 1950s, Chapter 7 British Functionalist Anthropology, Chapter 8 Mauss' Student and the Institut d'ethnologie in the Interwar Years, Chapter 9 The European Schools, Chapter 10 Latin America, Chapter 11 Asia, Chapter 12 The French-speaking Schools from the End of the Second World War to the 1980s, Chapter 13 The American Schools: Third and Fourth Generations, Chapter 14 The British Schools Since 1945