The Routledge Guide to European Political Archives
Sources since 1945 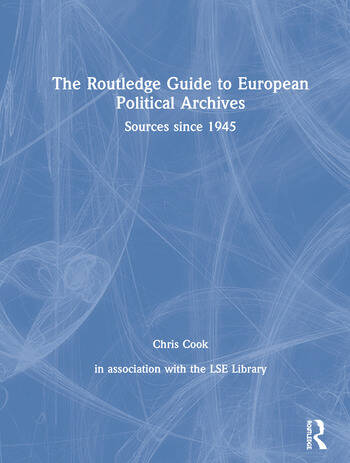 The Routledge Guide to European Political Archives: Sources since 1945

This new publication, a sister volume to the highly-acclaimed Routledge Guide to British Political Archives, provides a wide-ranging survey of the non-governmental archive sources for historians of post-war Europe. It provides, within a single volume, a rich treasure trove of resources drawn from the archives of the member states of the European Union and beyond. These major archive resources range from the International Institute of Social History in Amsterdam to the Modern Records Centre at Warwick University, from the European University Institute at Florence to the Archive of Social Democracy near Bonn, from the Feltrinelli Institute in Milan to the Monnet Foundation in Lausanne.

The volume also concentrates on providing resources for areas of Europe’s modern political past now increasingly attracting serious historical research. They include the initial post-war reconstruction era, the rebirth of social democracy in Germany and Italy, the beginning of European integration, relations with Eastern Europe, the Cold War, decolonisation, the fall of Communism, and so forth. A vital part of the story is represented by the papers of the principal architects of European integration, such as Monnet, Spaak, Spinelli, Mansholt, and so forth. However, the remit of this volume extends far beyond statesmen and politicians. It aims to embrace a wider spectrum of European political activism – from libertarians to environmentalists, economists and human rights activists, campaigners for women’s rights, peace activists, anti-globalists, trade unionists, leaders of the student movement, anarchists, federalists and anti-federalists, and a plethora of others.

The wealth of information provided here will make this new publication the standard point of reference for students and historians.

Chris Cook, a Fellow of the Royal Historical Society, was educated at St Catherine’s College, Cambridge, before taking his doctorate at Nuffield College Oxford. Formerly Head of the Modern Archives Unit at the London School of Economics, he is co-author (with John Stevenson) of Britain in the Depression, Other publications include the Dictionary of Historical Terms and (with John Paxton) and European Political Facts of the Twentieth Century.