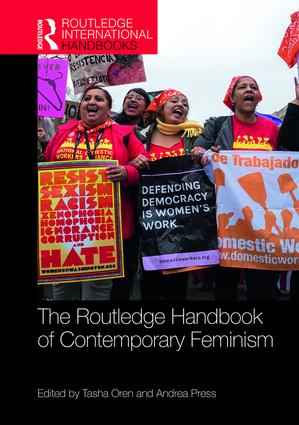 The Routledge Handbook of Contemporary Feminism

Feminism as a method, a movement, a critique, and an identity has been the subject of debates, contestations and revisions in recent years, yet contemporary global developments and political upheavals have again refocused feminism’s collective force. What is feminism now? How do scholars and activists employ contemporary feminism? What feminist traditions endure? Which are no longer relevant in addressing contemporary global conditions?

In this interdisciplinary collection, scholars reflect on how contemporary feminism has shaped their thinking and their field as they interrogate its uses, limits, and reinventions. Organized as a set of questions over definition, everyday life, critical intervention, and political activism, the Handbook takes on a broad set of issues and points of view to consider what feminism is today and what current forces shape its future development. It also includes an extended conversation among major feminist thinkers about the future of feminist scholarship and activism.

The scholars gathered here address a wide variety of topics and contexts: activism from post-Soviet collectives to the Arab spring, to the #MeToo movement, sexual harassment, feminist art, film and digital culture, education, technology, policy, sexual practices and gender identity. Indispensable for scholars undergraduate and postgraduate students in women, gender, and sexuality, the collection offers a multidimensional picture of the diversity and utility of feminist thought in an age of multiple uncertainties.

Section I: Ways of Being

2. Stories are Data with Soul: Lessons from Black Feminist Epistemology

3. In Does Feminism Have a Generation Gap? Blogging, Millennials, and the Hip Hop Generation

4. Too Soon for Postfeminism

6. On Feminist Frontier: On Trans and Feminism

9. Surveillance is a Feminist Issue

13. Why We Need Feminist Games Studies

14. Acting Out: Performing Feminism in the Contemporary Art Museum

15. Can’t I Just be a Filmmaker? Women’s and Feminist Film Festivals’ Resurgence in a Postfeminist World

16. Women Organized Against Sexual Harassment: Protesting Sexual Violence on Campus, Then and Now

18. Arab Women’s Feminism(s), Resistance(s) and Activism(s) Within and Beyond the "Arab Spring": Potentials, Limitation, and Future prospects

19. Pussy Riot: A Feminist Band Lost in History and Translation

20. None of this is New (Media): Feminisms in the Social Media Age

Tasha Oren is Associate Professor at the Film and Media Studies Program and the Department of Theatre, Dance and Performance at Tufts University. She has held faculty positions at the University of Pennsylvania and at the University of Wisconsin-Milwaukee where she directed the Film, Media and Digital Studies Program. Oren’s books and co-edited collections include Demon in the Box: Jews, Arabs, Politics and Culture in the Making of Israeli Television; Global Currents: Media and Technology Now; East Main Street: Asian American Popular Culture; Global Asian American Cultures; Global Television Formats – Understanding Television Across Borders; and the forthcoming Food TV: On Eating Media.

Andrea L. Press is currently William R. Kenan Jr. Professor of Media Studies and Sociology at the University of Virginia. A founding Chair of the Department of Media Studies and former Executive Director of the Virginia Film Festival, Press held faculty appointments at the University of Michigan, the University of Illinois Urbana/Champaign, the London School of Economics, and Hebrew University. Press has authored, co-authored, and co-edited several books, including Women Watching Television, Speaking of Abortion; The New Media Environment, Media and Class; Feminist Reception Studies in a Post-Audience Age; The New Feminist Television Studies;, and the forthcoming Media-Ready Feminism and Everyday Sexism.She co-edits the Communication Review. Professor Press is incoming Vice-Chair of the Feminist Scholarship Division of the International Communication Association.