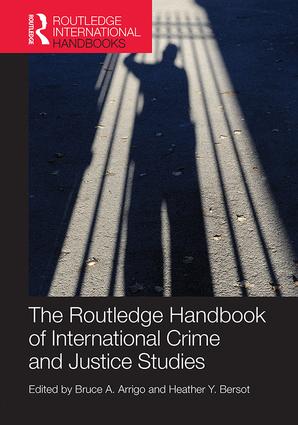 The Routledge Handbook of International Crime and Justice Studies

The Routledge Handbook of International Crime and Justice Studies presents the enduring debates and emerging challenges in crime and justice studies from an international and multi-disciplinary perspective. Guided by the pivotal, although vastly under-examined, role that consumerism, politics, technology, and culture assume in shaping these debates and in organizing these challenges, individual chapters probe the global landscape of crime and justice with astonishing clarity and remarkable depth.

A distinguished collection of experts examine the interdisciplinary field of international crime and justice. Their contributions are divided into thematic sections, including:

All the chapters include full pedagogy and instructional resources for easy referencing or classroom use. This Handbook will be useful for students, scholars and practitioners of law, medicine, history, economics, sociology, politics, philosophy, education, public health, and social policy.

Acknowledgements. Foreword. Introduction: Recognizing and Transforming International Crime and Justice Studies by Bruce A. Arrigo and Heather Y. Bersot Part I: Theory, Culture, and Society: The Narratives of Crime and Justice 1. Four Currents of Criminological Thought by Bruce DiCristina, Martin Gottschalk, and Roni Mayzer 2. Silence and the Criminalization of Victimization: On the Need for an International Feminist Criminology by Syeda Tonima Hadi and Meda Chesney-Lind 3. The Radical Philosophy of Criminology Culturalized: Intellectual History and Ultramodern Developments by Bruce A. Arrigo and Heather Y. Bersot Part II: The Industries of Crime and Justice: Systems of Policing 4. Global Non-state Auspices of Security Governance by Julie Berg, Sophie Nakueira, and Clifford Shearing 5. Policing the Globe: International Trends and Issues in Policing by Jude McCulloch and James Martin Part III: The Industries of Crime and Justice: Systems of Law 6. The Politics of International Criminal Justice by David Armstrong and Florencia Montal 7. The Challenges of International Criminal Law in Addressing Mass Atrocity by Philip Clark 8. Crimes against Animality: Animal Cruelty and Criminal Justice in a Globalized World by Deborah Cao 9. Understanding the Intersection Between International Human Rights and Mental Disability Law: The Role of Dignity by Michael Perlin Part IV: The Industries of Crime and Justice: Systems of Corrections and Punishment 10. Isolative Confinement: Effective Method for Behavior Change or Punishment for Punishment’s Sake? by Terry Kupers 11. Fabricated Selves and the Rehabilitative Machine: Toward a Phenomenology of the Social Construction of Offender Treatment by David Polizzi, Matthew Draper, and Matt Andersen 12. The Society-of-Captives Thesis and the Harm of Social Dis-ease: The Case of Guantánamo Bay by Bruce A. Arrigo and Heather Y. Bersot Part V: The Criminal Enterprise: Types of Commerce, Consumerism, and Conspicuous Consumption 13. Global White-Collar Crime by Mary Dodge and Gilbert Geis 14. A Suitable Amount of Street Crime and a Suitable Amount of White Collar Crime: Inconvenient Truths about Inequality, Crime and Criminal Justice by Paul Leighton and Jeffrey Reiman Part VI: Global Technologies: From the Surveillance of Humans to the Management of Situations 15. Current and Emerging Technologies Employed to Abate Crime and to Promote Security by Rick Sarre, David Brooks, Clifton Smith, and Rick Draper 16. Technologies of Crime Control: International Developments and Contexts by Ronnie Lippens and Patrick Van Calster Part VII: Media, Crime, & Culture: Simulating Identities, Constructing Realities 17. Media, Entertainment, and Crime: Prospects and Concerns by Ray Surette and Rebecca Gardiner-Bess 18. Media, Crime, and Culture: Simulating Identities, Constructing Realities by Eamonn Carrabine Part VIII: Green Criminology: Environmental Hazards, Natural Disasters, and Ecological Sustainability 19. Green Criminology and Green Victimization by Melissa Jarrell, Michael Lynch, and Paul Stretesky 20. What is to be Done about Environmental Crime? by Rob White Part IX: Political and State Violence: Struggles, Conflicts, and Transitions 21. Redressing Violence in Sub-Sahara Africa by Susanne Buckley-Zistel, Teresa Koloma Beck, Friederike Mieth, and Julia Viebach 22. The Circle of State Violence and Harm by Dawn Rothe and Victoria E. Collins 23. Fundamentalism, Extremism, Terrorism: Commonalities, Differences and Policy Implications of ‘Blacklisting’ by Hans J. Giessmann Part X: Public Health Criminology: Global Risks and Transnational Responsibilities 24. HIV/AIDS at the Intersection of Public Health and Criminal Justice: Toward an Evidence-informed, Health and Human Rights-based Approach by Rachel M. Amiya, Jessica E. Cope, Krishna C. Poudel, and Masamine Jimba 25. Addressing the "Inherent" Philosophical and Operational Dichotomies of Corrections from an EpiCrim Approach by Mark Lanier, David Polizzi, and Alexandra Wade Part XI: The Political Economy of Crime and Justice: The Trade in Colonialism, Nationalism, and Globalism 26. Crimmigration: Criminal Justice, Refugee Protection and the Securitisation of Migration by Alison Gerard and Sharon Pickering 27. Personhood, Legal Judgement and Sovereignty at the Cape, 1793-1810 by Jennifer Hardes, Patrick McLane, and George Pavlich

Bruce A. Arrigo is a Professor in the Department of Criminal Justice and Criminology at the University of North Carolina – Charlotte. His recent collaborative works include The Terrorist Identity (2007), Revolution in Penology (2009), The Ethics of Total Confinement (2011), and Introduction to Forensic Psychology 3rd ed. (2012).

earned a Master of Science degree in Criminal Justice from the University Of North Carolina – Charlotte. Her work has appeared in the Journal of Forensic Psychology Practice and The Journal of Theoretical and Philosophical Criminology. Her recent co-authored book, The Ethics of Total Confinement (2011), was published by Oxford University Press.